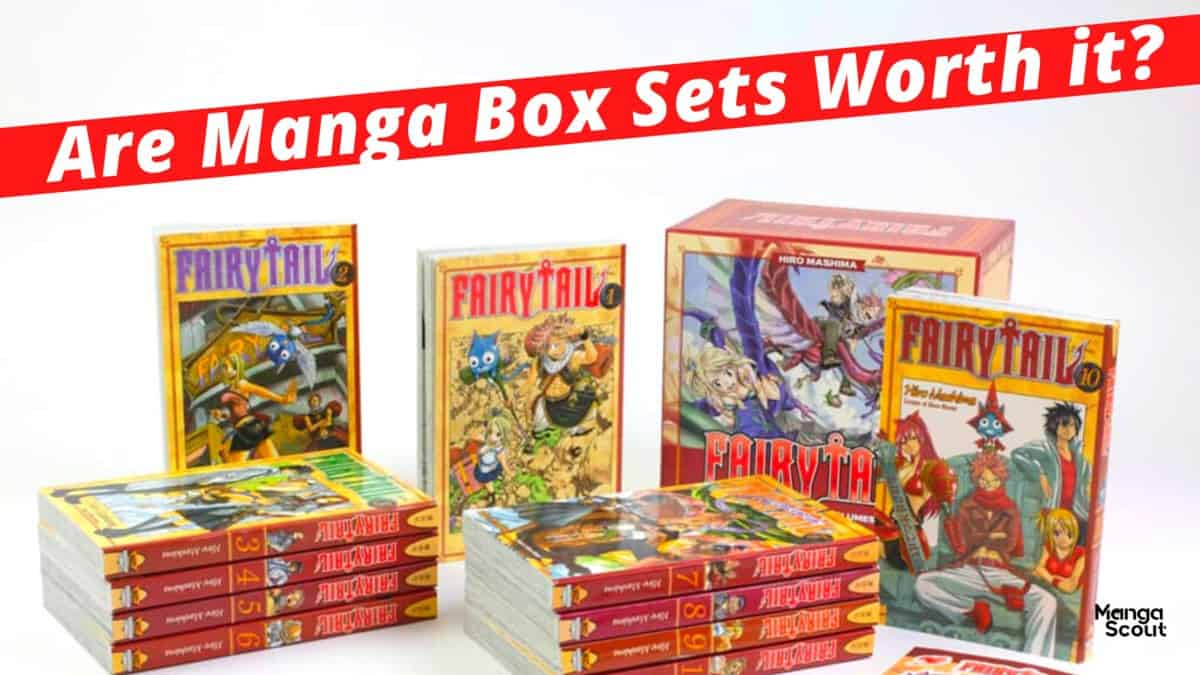 K.D.WilsonManga Explainedbuy manga, manga box setsNo Comments on Are Manga Boxes Worth it? (Prices and comparisons)

Starting a manga collection can be painful to the wallet. It also takes a lot of time since you have to search for the manga volumes you want to buy. Sellers may have volumes 1-6 and 8-10 in stock, while volume 7 is missing.

Are Manga Boxes Worth it? Yes, manga boxes are a good option if you want to collect manga because they ensure that all consecutive volumes in one arc are complete. Usually, they are even cheaper than buying manga individually.

Let’s find out! Even when it means dropping a hundred grand in one.

How Much Are Manga Box Sets?

Manga box sets range from $40 to $220. The price depends on how many volumes are included in the set. The initial cost of an individual manga is also a factor.

We have a list of the best manga box sets here. That also includes some cheaper options.

For example, we have Attack on Titan. Season 1 and 2 of its manga box sets are worth $43.96 each. They all contain four manga volumes each.

Meanwhile, the Season 3 manga box sets are worth $54.95 each. This is because they contain five manga volumes each.

Set 1 of the Season 4 manga box sets is then worth $65.94. This is because it includes six volumes of manga.

Why are other manga sets so expensive? The more volumes they include, the more expensive they become. Some of the manga box sets around $200 already have all the volumes of the series.

An example of this is the Assassination Classroom Box Set. It already comes with all 21 volumes of the manga.

However, there are series with multiple expensive box sets. These are usually for long-running series like One Piece and Naruto.

One Piece, which is still ongoing, currently has four box sets. These cover up to volume 90 of the manga. Each one is priced at $185.99, and they include around 20-25 tankobons each. This means that you would have to shell out $743.96 to read that far. That’s quite expensive, and even then, your collection wouldn’t be complete yet.

As you can see, box sets tend to come out around the same price as buying individual manga. The Attack on Titan box set was priced exactly as a manga bundle. Meanwhile, the Assassination Classroom set came out a little cheaper.

However, both of them are considered better deals than buying individual manga. Why? Because they come with exclusive and premium items.

Purchasing box sets should be your first choice with these kinds of bonuses. They are more economical, enjoyable, and convenient than purchasing individual manga.

So that you can better see the best deals, here is a price comparison of a few popular manga box sets. We layout the price of an individual manga, the cost of its corresponding box set, and how much money you save.

In this table, you can see that buying manga box sets will save you money. It also gives you exclusive merchandise.

In comparison, purchasing individual manga is tedious and time-consuming. You would have to manually search for all the volumes. Even if you do find them all, they don’t come with the beautiful boxes or the freebies of a box set.

Where to Buy Manga Box Sets?

Manga box sets are already a good deal as they are. However, you can save even more money by looking for deals with different sellers.

Amazon is a good place to look for deals on manga box sets. They conduct sales every so often. If you have Amazon Prime, you can even get them with free shipping!

For example, the Attack on Titan manga box set we mentioned earlier is priced at $43.96, right? That is when you purchase it at the retail price. When you buy it through Amazon, you can get it for as low as $39.56!

Barnes and Noble is a great place to look for manga box deals. Now, the sets are usually not included in online free shipping. But since Barnes and Noble has physical stores, you can just walk in and check if there’s one in stock near you!

That way, you won’t have to worry about shipping fees. You also get to ensure that you’re receiving the box set in good condition.

Here is one example of a deal you can get from Barnes and Noble:

According to the retail pricing from Viz Media, the Bleach Box Set 3 costs $199.99.

Books-a-million is a website known for its great deals. If you become a part of its Millionaire’s Club, you can even get free shipping on any purchase! The membership also comes with coupons that you can use to drive that final price down.

Yet even without these, you can still avail of pretty good deals. For example, the Akira 35th Anniversary Box Set retails for $199.99.

In comparison, Books-a-million has it on sale for $146.

Rightstufanime is a website that seems to have a sale every single day. To add to that, they offer an additional 25% off for pre-orders.

For instance, these Cells at Work! Complete Manga Box Set retails for $77.94.

But if you buy it from Rightstufanime, the price shoots down to $58.46.

If you want to save even more money, the website offers a membership. You have to pay an initial membership fee, but this gives you access to an additional 10% on all purchases. That is on top of the other discounts. You also get coupons and members-only promotions.

Are manga box sets worth it to you?

Would you rather collect manga box sets or individual volumes? Why?

Are Manga Boxes Worth it? (Prices and comparisons)