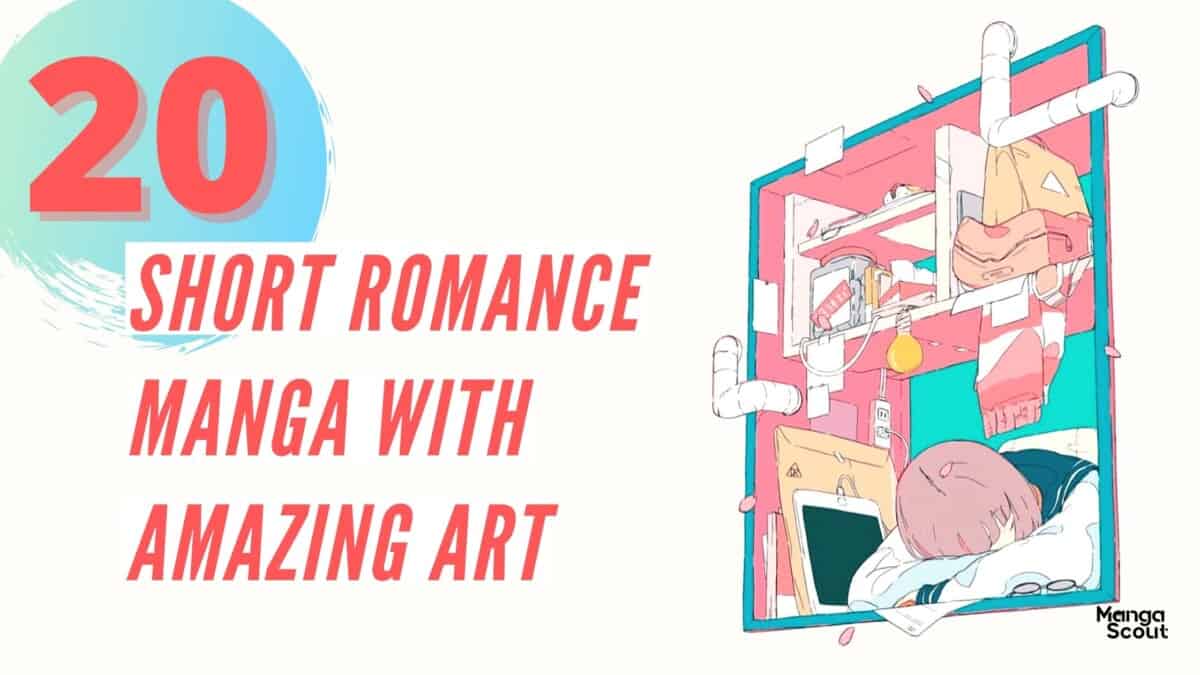 It usually takes several volumes to build up a good romance story. But some manga defies this premise. They serve both beautiful art and compelling stories in six volumes or less.

Here are some of my favorite short-length romance manga:

It’s a clever piece of one-shot using an analogy of a Russian doll. The title page showcased an incredible watercolor art reminiscent of the matryoshka.

Ando Yuki’s artwork fits the nostalgic tone of the plot. The panels were well-sequenced and well-shaded. Diversified angles and close-ups emphasized the changing facial expressions of the characters.

In a few pages, Matryoshka captured the sadness and sweetness of unrequited love.

Ichinose-sensei’s ability to draw in perspective highlighted the flexibility of her line work. Every element is well-put-together, creating smooth transitioning panels- something essential for action.

From soft romance to gripping fantasy, we go straight to another one-shot, 3 Hearts.

Ichinose Kaoru breathed life to the story of the handsome phantom thief on a floating airship. It’s a fast-paced swashbuckling tale filled with romance, action, and revelations.

The story is simple. Jin Tonic, who’s out to get the greatest treasure in the world, met a runaway woman who changed his life.

3.) Le Theatre de A and B by Nakamura Asumiko

What made both of the two manga unique is the addition of flat, simple colors. The colors highlighted the intricacy of the costume and object details. The mangaka also exhibited excellent use of minimal patterns to emphasize certain elements.

Both mangas contain the mangaka’s previous published works from the Gothic and Lolita Bible. They consist of stories flavored with horror, fantasy, and romance.

The art style works with the general theme of the manga- goth and lolita.

With the minimalistic backgrounds, she sewed a tinge of mystique into the pages. Each character carried the charm of dolls that made the whole manga magical.

Showing mastery of both art and storytelling, Kamata Kimiko gave us Dream Eater. It is a fantastical anthology involving a nightmare-eating mare.

Each story showcases a different setting.
The well-executed character designs helped in the profound development of the plot. Each foreground and background element matched the whimsical fairytale-like stories.

Art played a big role in delivering this piece.

Nagayasu-sensei did a great job sequencing the pannels in a way that unveils each aspect of the story one by one. It made the readers sympathize with the main characters while evoking anticipation.

Nagayasu Takumi matched the somber tone of his manga with dark realistic lines. Each page is heavy with emotion.

6.) The Tale of the Bamboo Cutter by Ikeda Riyoko

Her classic Japanese style matched the general theme of her drawings. Plain, non-stylized illustrations highlighted the scenes- playing out like a kabuki.

She created both sweetness and sadness that are essential to the much-loved folktale.

Ikeda Riyoko took the story of Princess Kaguya and transformed it into her very own.

The Tale of the Bamboo Cutter started with a fun and whimsical note and ended with somberness. The mangaka did great in illustrating the growth of the main character. Each page is alight with adventure and wonder.

7.) Kurokami no Helga by Saku Yukizo

The mangaka made perfect use of negative spaces and blackouts to mimic emotions. Wide-angle illustrations were perfect to portray the main character’s uniqueness and loneliness.

Everything added up together to form one solid output- the short, but sweet tale of Helga.

Kurokami no Helga is an allegory to innocence. It explores an intriguing premise packaged as a fairytale-like story.

Transitions played a big role in the storytelling. The plot cycled from bright to dark with such sharpness that was only made possible by using shadows.

The changing facial expressions of the characters played a big role in driving the plot.

Graceful lines and minimalism highlighted every panel of the manga. It directed the focus of the readers on the characters.

Every scene made the readers appreciate the thoughts and emotions of the characters. By doing so, the story becomes so immersive you can almost taste the pure kiss.

The backdrop is historical Japan. Mademoiselle Butterfly tells the story of a geisha and a tattoo artist.
By paying attention to the details for historical accuracy, Ogura-sensei took us time-traveling.

Her linework is neat and simple. But it allowed her to play around with specific details such as textures. She incorporated beautiful patterns such as flowers and butterflies.

Such patterns made the completely black and white illustrations feel colorful without color.
The sequencing of the events also allowed her to paint the picture of a slow-growing love. It’s a heartfelt romance rooted in art and beauty.

10.) Hana Wants This Flower to Bloom! by Haruna Ueno

Angling played a huge role in brewing the potent sense of sweetness. You see everything told from the perspective of Hana, the main female character. Perspective drawing became the glue that binds her point of view together.

Haruna Ueno-sensei captured the hilarity of pursuing love with her masterpiece. It is a modern romantic comedy about an office lady chasing after a tsundere salaryman.
Her artwork is reminiscent of Wotakoi, which is another Slice of Life romance manga. This goes well with the indulgent pacing of the story.

Each panel unfolded with such care to build up the feeling of falling in love.

Both paneling and pacing interacted in creating a compelling sequence of events. The perfection of the scenes unfolding one by one contributed to making sense of the story.

Oiran Girl is another tale about the red light district.

Hibiki Wataru exhibited her drawing and storytelling techniques with this work. Much like other historical fiction, historical accuracy highlighted the beauty of this manga.

The character designs maximized the artful elements of hairpieces and costumes. But by adding her personal touch to the characters, she made them memorable.

The paneling and sequencing are well thought of. There is a generous and effective use of perspective and positioning.

Remarkable main characters cement the popularity of the manga. But there are some manga that goes beyond this rule. In Warau Kanoko-sama, the protagonist looked every bit your average bespectacled high schooler.

The self-proclaimed observer, Kanoko, finds herself thrown into interesting situations. It defies her insistence of being the observer, sparking the consistent comedic cycle.

But this is not the only thing to look forward to in the series. Yuki-sensei also illustrated the settings to match the gaudy foreground elements.

The clean use of shadows and highlights contributed to the overall punk aesthetic of the manga.

A characteristic gothic theme predominates Ludwig’s Revolution. In a simple sense, it is a retelling of our favorite Grimm’s fairytale with comical characters.

We follow the adventures of necrophiliac Prince Ludwig who is in search of a bride. He’s accompanied by his trusty aid and a witch. Together, they meet various fairytale characters in rewritten circumstances.

Yuki-sensei’s unique art style gave life to Ludwig and the ensemble of people he met. She designed them to model punk rock artists crossed with baroque paintings. This gave rise to a set of colorful characters. It became such an incredible feast for the eyes.

Sesame Salt and Pudding presented a slow-burn romance. So the use of close-ups is an adequate way of evoking the feeling of falling in love. The panels and illustrations are also bright with light shading. This packaged the manga as a light romantic comedy.

A cohabitation love story between a female machine operator and a calligraphy artist. It’s a soft romance filled with comedy and witty dialogues.

The neat and simple paneling imparted a warm, romantic feeling to the manga, and it made reading easy.

Suzuki-sensei made use of close-ups to show us soft smiles and crinkling eyes. This artistic decision became a vehicle of effective storytelling.

The inclusion of colored pages into the manga is always a treat. With this particular series, the mangaka made use of watercolors. The medium imparted a certain degree of softness.

This softness embroiled the illustrations with a dream-like aura. It created the perfect exposition to a sad tale.

The following non-colored pages are also of equally good quality. Each line has texture. When combined together, the lines immortalize a melancholic feeling.

We can say that Yumeka Sumomo captured the emotions of loneliness and regret. She bottled them together with love and sadness to recreate Gong Ji-Young’s novel.

Taking a simple concept and elevating it into something more makes for pure talent.
Henshin Ganbou! is a one-shot manga about a baseball player who wanted to confess to the school idol.

The manga has all the excitement and fast-paced entertainment of a shounen. But it did not sacrifice the tenderness of romance.

Miyokawa-sensei’s art is the scaffold on which an energetic teenage boy came to life. It worked well with the hilarity of Nisio Isin’s writing. Matching the lightness of the story is the softness of the artwork.

There is an emphasis on the little details like blushing and clenching fists. It personalizes each scene.

A persistent sense of emptiness and melancholy could be the feeling the mangaka is going for. Asano Inio illustrated another masterpiece exploring the intricacies of love and relationship.

His expertise in utilizing perspectives and expressions made for a profound manga.

He made use of both close-ups and wide-angle illustrations. Putting these together with consistent line work and dark fill-ups amped the subtlety.

His ability to draw places and everyday objects with accuracy elevated simple scenes. It is as if you a back to experiencing the tumult and complications of high school life all over again.

Simplicity is beauty. Even manga can attest to this.

There is a charm about taking something simple and building a premise around it.

Like several others that came before it, this is how Hana o Meshimase worked. Iwashita-sensei took something as simple as flowers and grieving. She transformed into a heartfelt, sweet romance.

The characters themselves are simple. There is not much fuss about the character design. But this puts emphasis on the beauty of the flowers that appeared plenty of times in the series.

One-shot romantic comedies work with a limited number of pages so they need to have an impact.

Money, Romance, and Me exemplified impact by working with an absurd plot. To go with it, Numa Shun ensured that the character designs also carry a level of comedic strength in them.

His clean illustrations and use of shading elevated the hilarity of the situations. The panel sequence is also a work of genius. He used this to emphasize character points of view.

20.) Tomodachi no Hanashi by Kawahara Kazune and Yamakawa Aiji

This manga excelled with its portrayal of tight friendship and teenage relationship dynamics. But it is not only the beautiful writing that can seize your attention.

That concludes my 20 best short romance manga with good art.

What are some of your favorite romance manga?

Whatever your answers are let’s hear them in the comments below.