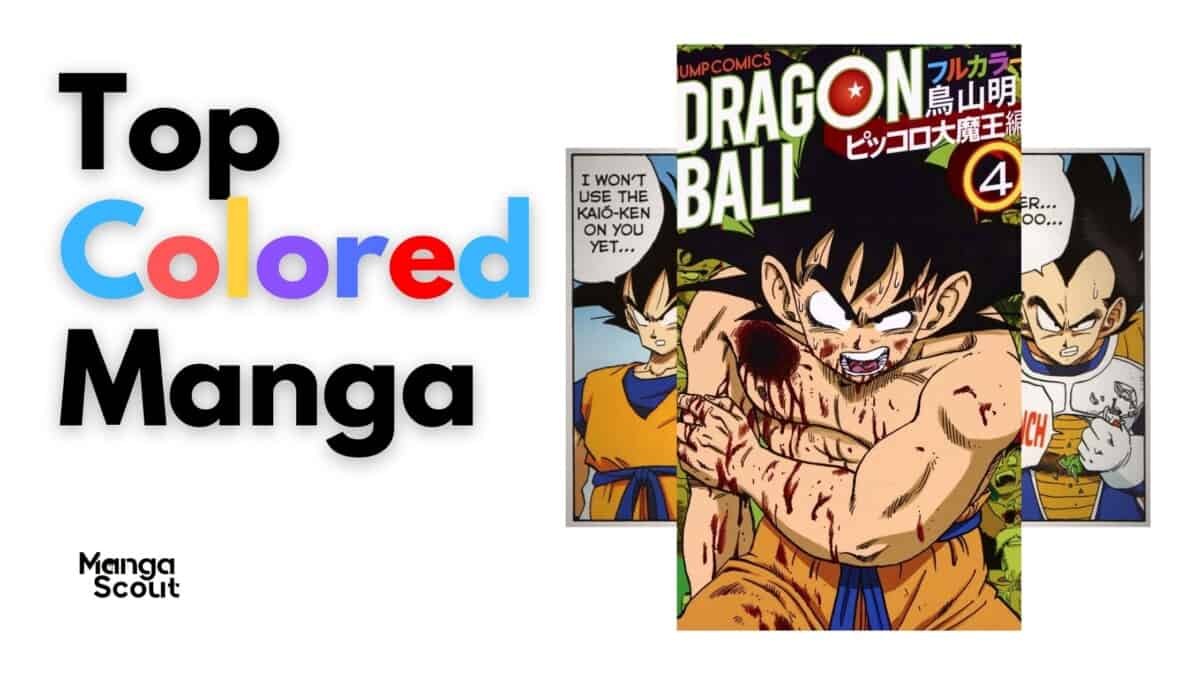 As an art form, manga is known to come in black and white. But did you know that there is manga that has been released in full color? Some have physical copies reminiscent of comics, and a few were released online.

In this article, we will list the 13 best-colored manga. Most of them are manga that has previously been released in regular black and white. They were especially re-released in color as special editions.

Prepare to liven up your manga-reading life.

Check out this best-colored manga!

Kuro (Somato) is about a young girl named Coco. She lives alone in a mansion, with just her cat, Kuro, as her sole companion. They go off doing daily adventures around the house, and they are blissfully stuck in their world.

Yet something feels off. This is easily conveyed by how Kuro has been drawn. And as the story goes on, we begin to see why.

Interestingly, we are unveiled to an outside world where things are dark and life is hard. We see towns where people are afraid of Kuro and Coco, though we don’t really know why.

The whole plot is mysterious and unique. The story feels sinister at certain times, but it can also feel like just another slice of life manga.

What’s even more impressive though is the art. This is one of the rare mangas that were originally released in full color. Hence, the panels look vibrant and stunning, even during dark plot lines.

This manga is also about a cat, but its themes are the exact opposite of Kuro (Somato). As stated in the title, this is a story about Chi, a cute kitten who just got adopted by the Yamada family. She is kept safe and warm in their small apartment, where pets are actually not permitted.

It’s a funny, heart-warming tale of what it means to take care of a cat. It follows Chi as she grows with her family. Hence, there is also conflict, tension, and frustration. Still, at the end of the day, they are a unit. And as we see from Chi’s perspective, she loves her small family the same.

This was released in a full color version, both in print and online. The drawings are adorable as can be expected, and it’s a good feel-good read.

Re:LIFE was originally released as a Japanese webtoon. Hence, it was in full color from the very start. It was eventually published in print after it experienced success as an online comic.

The story follows Arata Kaizaki, a NEET in his mid-20s. He seems to hold promise as a worker but has been confined to a convenience store job for years. Then, one day, he was approached by a mysterious, suspicious man for a job opportunity.

His task? To partake in an experiment. He would drink a pill that would make him look like a teenager and go back to high school. For Arata, it was like a do-over, and now, he’s all about living his youth right. So, he takes the job.

It’s a fun, interesting read, as Arata tries to mask his old-man maturity among teenagers. It’s also nice to see him live up to his full potential.

4.) High School of the ᗪEᗩᗪ

High School of the ᗪEᗩᗪ is a bestselling manga that has an anime adaptation.

It was originally released in black and white and was remastered in color a few years later. The colored versions were compiled in regular tankobon and in special omnibus editions.

This manga captures the story of a group of friends in a ᴢᴏᴍʙɪᴇ apocalypse. The story is first set in their high school, then they eventually go out into town. There, they deal with more issues, meet more allies, and fight more battles.

It’s interesting because it’s more than just an apocalyptic manga. It also deals with the threat of societal collapse as teenagers. They have to deal with the nuances of ethics and morals, in a world that is about to end.

Attack on Titan is a highly popular manga. Because of its fame, it’s rather unsurprising that they released a colored version of it. Think Isayama’s amazing drawings in full color. That is a good enough incentive on its own.

The story is set in a different world, where Titans roamed and humans lived in restricted cities. This is their way of surviving, as Titans have ᴋɪʟʟᴇᴅ off most of humanity.

After a few years, he discovers that he has the ability to turn into an Attack Titan. He uses this power to help defend the cities and surrounding walls. Eventually, he and his friends discover that he is not the only one who can change. Now, they have to defeat the enemies who have been hiding within their walls all along.

The unfolding of this plot plus the more than stunning art should convince you to give this one a read.

Many readers across the world first discovered manga because of Dragon Ball. It is a true classic and is the third best-selling manga series of all time. It continues to influence a lot of shounen stories to this day.

The story centers on Goku, a boy with a monkey tail. He and his friend, Bulma, travel the world in an attempt to find the seven Dragon Balls. They believe that by doing so, they can summon the dragon, who will then grant one wish for them.

They make friends and enemies as they go along their journey. And as time passes, Goku becomes stronger, smarter, and more renowned.

The entire manga actually follows Goku’s journey to adulthood. We even get to see him as a father! And all throughout, he remains the quintessential shounen hero: brave, sacrificial, and hopeful.

The manga was originally released in black and white. It was re-released in full-color decades after the series finished.

Buzzer Beater was written by Takehiko Inoue, the mangaka of Slam Dunk and Vagabond. Unlike the other two, this was originally released as a webcomic. It was serialized in the Monthly Shonen Jump not long after.

The story is about Hideyoshi, a gifted basketball player. He’s from New York and he just got drafted into the Earth All-Star team. They are set to fight against other basketball (alien) teams in the Space League. They intend to win the championship as the universe’s best basketball team.

The illustrations for this one are pretty unique, given its unique story. The colors are used to convey sci-fi and futuristic themes, as you can see in this panel:

Akira is a unique, cyberpunk manga that is in a league of its own. It ran from 1982 to 1990, making it a few decades old. However, it still manages to capture the interest of readers today. It was re-released in color via Epic Comics, but these editions are hard to come by. This makes Akira in full color a true collectible.

The plot itself is set in a post-apocalyptic world. Bikers Shima and Kaneda were just biking around the ruins of Old Tokyo. Then, a chain of events leads them to know of Akira.

Akira at the time was just a government secret. No one understood how she was connected to the ensuing military chaos. Eventually, they discover how central she is to everything.

Given the setting, the manga explores social themes like gangs, poverty, and rebellion. It shows the crippling of society and gets into the intricacies of a government in a fallen world.

One Piece is the best-selling manga series of all time. It’s also one of the longest-running. Hence, the re-releasing of the manga in full color was no easy feat. The fact that the publishers did it shows that they know there’s a market for it. And there is.

This manga series is critically acclaimed. It has won credence for its storytelling, art, and characterization. Its official translations are currently distributed in 58 countries. There are 490 million copies in circulation.

The story focuses on the adventures of Luffy, a man made of rubber. He calls himself the King of the Pirates and is on a journey to find One Piece, a treasure from the legends. He organized his own crew called the Straw Hat Pirates, and they are quite the unique bunch.

The plot unfolds as they encounter adversaries and setbacks along the way to their goal. There are scary pirates and criminal organizations. There are even secret agents from the World Government! Their travel is long and winding, but they press on in pursuit of the One Piece.

If you truly want a long read, you should go for Jojo’s Bizarre Adventure. This manga has been running from 1987 to this day, and it currently has 131 volumes. It is unique and is well-known for its art, storytelling, and unpredictability.

It has several main characters, all of whom belong to the Joestar family. The original Jojo is Jonathan Joestar. His conflict with Dio, a man who can turn into a vampire, sets the stage for the next six generations of the Joestars.

Every generation has its own battle and enemy to win though. And each main character has a journey they need to go through. All are unique in some way. Some deal with humanoids while others deal with serial ᴋɪʟʟᴇʀꜱ and mafia bosses. There is always a twist, hence the title.

Now, the full-color release of this manga is known as Jojo’s Colored Adventure. It was only released online. It has caught up with its black and white counterpart, so all past volumes have already been colored.

Bakuman is probably the best manga out there about, well, manga. Like many others, it was originally released in black and white. The colored version can only be accessed digitally via Shueisha’s official website.

This manga follows the journey of Mashiro and Takagi. Mashiro is an author, and he taps Takagi to be the artist for his manga. We watch them grow together through the years, as individuals, friends, and mangakas.

The story perfectly captures the struggle to become a mangaka. Readers gain a renewed appreciation for the hard work put into the manga they get to enjoy. Because of that, I recommend this as a must-read.

Bleach is one of the most successful media franchises there is. It has an anime adaptation, two OVAs, four animated films, many video games, and even stage musicals! Now, it even has a colored version of the original manga, made available online.

The series shows us the story of Ichigo Kurasaki. He can see ɢʜᴏꜱᴛꜱ and he eventually gains the power of a Soul Reaper. This marks him as a man with a duty. Now, he has to defend humans from evil spirits and guide souls into the afterlife.

Of course, such a unique journey means many tales, adventures, and problems. Thankfully, he meets other spiritually empowered teenagers along the way. This makes his team, and together, they navigate the ɢʜᴏꜱᴛʟʏ realms.

Spy X Family is a fun, exciting manga about a spy who needs to establish a family for a mission. Incidentally, the child he asks to be his daughter is a mind reader. Meanwhile, the woman he asks to be his wife is an assassin. And he doesn’t know. You can imagine the chaos that ensues.

The manga (in black and white or colored) and anime adaptations are still ongoing. Nonetheless, Spy X Family already has an established fan base. There is a clamor to release the colored manga version in print, but for now, it is only available online.

What is your favorite colored manga?