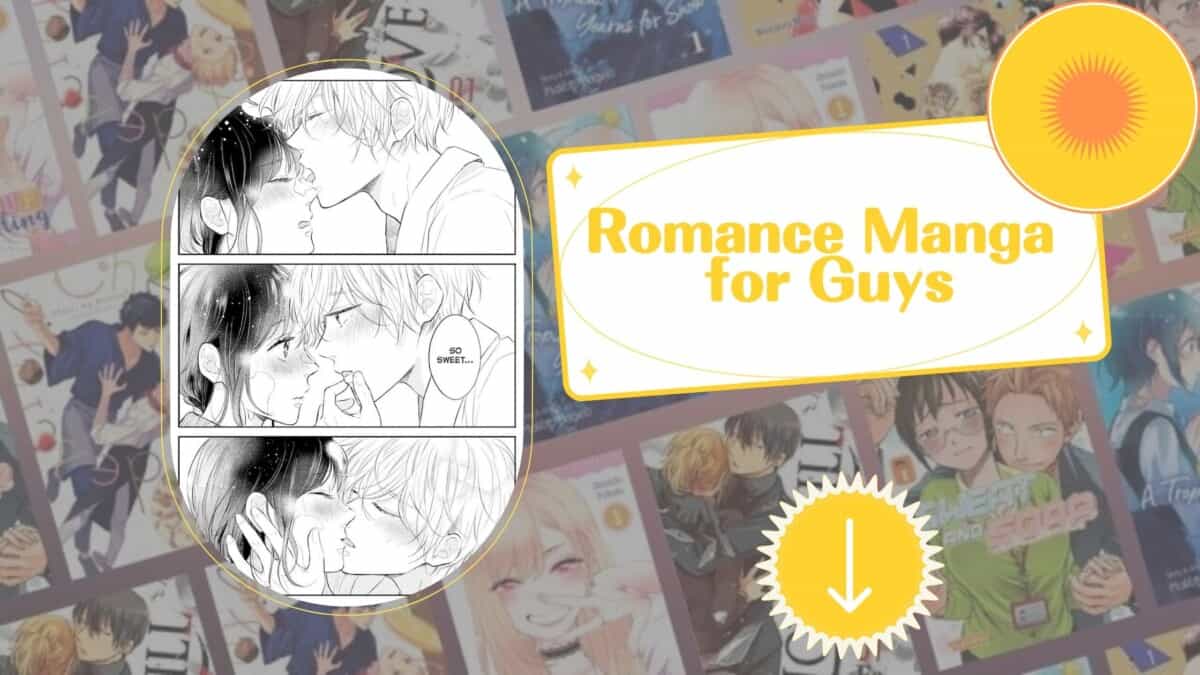 Romance manga is usually associated with female readers. However, there a lot of guys actually read romance manga too! In fact, there are plenty of romance mangas that were written with a male audience in mind.

In this article, we will list the 10 best romance manga for guys. Most of them are told from the male perspective and are classified as shounen. They contain the typical story of boy meets girl, but with many twists and differences along the way.

So, if you’re a male and you’re looking for a little romance to spice up your life, read on!

Horimiya follows the love story of Hori and Miyamura. They are two high school students who seem to be complete opposites on the outside. Yet as they get to know each other better, it turns out they are more alike than they think.

Hori is the female lead. She is smart, beautiful, and everything a popular girl is. Meanwhile, Miyamura is quiet, nerdy, and wears glasses. Yet one day, they find out each other’s true selves.

It turns out Hori is not as put together as she appears and Miyamura is much cooler than projected. The manga is largely portrayed from the lens of Miyamura. We see how he grows to like Hori and gains more confidence in himself.

Because this is a slice-of-life manga, readers can watch how this plays out progressively. Guys can likely relate to Miyamura’s internal struggles while witnessing his development. They see him grow, not just as a person and a friend, but also as someone who is learning about romance.

Nisekoi is about a teenager named Raku. When he was young, he made a promise to marry his childhood friend when they grow up. Fast forward to a decade later, Raku has forgotten to who he has made the promise. However, he still has the locked pendant for which his childhood friend holds the key.

He is now a high school student and the heir to a yakuza family. Although he has a crush on someone else, he is being forced into a romantic relationship with Chitoge. She is the daughter of an enemy yakuza family. They got together for the sake of peace, except they can’t stand each other.

And as he and Chitoge grow closer, a number of girls begin to join the mix of their relationship. One of these girls may be a childhood friend who holds the key to his heart.

This manga is told from the male perspective, as Raku is the central character despite it being a love story. As a harem, readers are kept at the edge of their seats. Who will Raku choose?

Bonnouji is categorized as a seinen manga. It tells of the deepening relationship between Ozawa and Oyamada. They live in the same apartment and are brought together by a series of funny events.

One thing to enjoy about this manga is that it is very straightforward and heartwarming. Because the main characters are in their late 20s, there is less trivial drama. Instead, it is simple. And its simplicity is where its strength lies.

If you want to read a romance manga that isn’t too serious or dramatized, this is the one for you. Just note that it may contain some ᴀᴅᴜʟᴛ ꜱᴄᴇɴᴇꜱ, given its age demographic.

Iris Zero takes place in a high school, but it caters to the seinen and older shounen demographic. It contains fantasy and mystery elements, but romance still takes center stage.

In this manga world, Irises are what they call the special powers possessed by people. 99% of the population has an Iris. It can range from lie detection to the ability to tell when someone’s about to ᴅɪᴇ. Now, this manga follows the life of Toru, a boy born into the 1% without an Iris.

Because he has no powers, he was constantly bullied and mocked by his classmates. Hence, he just chooses to live a life with “minimum exposure.” This means that he does not want to do anything that would make him stand out.

But then one day, he is approached by Koyuki, the most popular girl in school. She has the ability to see who is the best person fit for any and every job. In this case, she sees that Toru is the best fit to help them deduce who will be the next student body president.

This marks the beginning of his changed life. Soon enough, more and more people approach him for his ability to deduce and solve mysteries. All while his relationship with Koyuki grows deeper.

This manga is perfect for guys who enjoy romance but still want a unique, interesting plot.

Otomen has a fun, funny plot that is enjoyable to males and females alike. Still, the main character is a male and the female lead has masculine traits. Hence, its appeal can lean towards the shounen demographic.

This manga tells the tale of Asuka, a handsome young man who likes things that are more feminine in nature. But when his father abandoned their family when he was a child, he had to step up. He had to fit the mold to be the man of the house.

Because of this, he shifted his attention toward martial arts. Eventually, he became a nationally ranked captain of kendo. He keeps up the act, and both males and females alike admire him.

But then he falls in love with Ryo, a girl who is his exact opposite in nature. She is tough, strong, and unladylike in every way. And the more he gets to know her, the more he allows himself to be who he truly is.

Some may argue that it leans into binary themes, but this isn’t really the case. The attractions strictly fall between males and females. It’s just a matter of them breaking common stereotypes of what it means to be a man and a woman.

Suzuka is a sports shounen manga following the life of a high schooler named Yamato. He moves into a new high school and sees a beautiful, talented girl training for the high jump. This girl is Suzuka, and it turns out she lives next door to him in the dorms.

Yamato has a crush on her and so he joins the track team. He wants to impress her, though he may not know how at the beginning. As luck would have it, it turns out he’s great at the hundred-meter sprint.

And so he begins to train as he falls in love with the sport and Suzuka. The manga shows us how he tries to win her heart, though she was cold and brutal to him at times. This is perfect for guys who are looking for a “you bring out the best in me” story.

Unbalance x2 is an ᴇᴄᴄʜɪ, comedy, romance manga. It tackles the forbidden romance between a student and his homeroom teacher. It may come across a certain way, but it has more depth than it sounds.

For one, it delves into the nuances and controversies of such a relationship. Jin-Ho, the student, and Hae-Young, the teacher, find themselves pulled together by fate. They then work on navigating the intricacies and tensions of their situation.

The characters are intriguing. The main characters do not fit the typical mold of shounen romance leads. Of course, the harem may sometimes add complications. Still, this makes for an enjoyable read.

This is otherwise known as Chibi Vampire. It is a shounen manga that tells the story of a unique vampire named Karin. Unlike other vampires, Karin does not feed on blood. Instead, she produces it. So she bites on people to release the excess blood as she gets really bad nosebleeds otherwise.

Karin pretty much lives her life like an ordinary teenager. Again, unlike other vampires, she can go outside during the day and interact with humans. However, she encounters trouble when Kenta transfers into the school.

For some reason, Karin’s blood increases every time she goes near Kenta. Hence, she had to resort to drastic measures. Kenta walks in on Karin biting on another student and misinterprets the situation. This leads to a series of misunderstandings.

After a while, things get cleared up and Kenta discovers Karin’s secret. They become closer and eventually become a couple. But understandably, they face a pile of challenges as they fight for their relationship.

This manga is more complex than it first appears. And as male readers would agree, it portrays a healthy, albeit unique, relationship. This is rare to find in romance mangas.

Good Ending is a romance, slice-of-life shounen manga that has sports themes. It’s about a second-year high school student named Seiji, who is in love with upperclassman Shou. Shou is the captain of the tennis team, and Seiji just crushes on her from afar.

One day, he is mistakenly accused of peeping by Yuki, a tennis club member in his class. Yet as he clears his intentions, they grow closer. Eventually, Yuki agrees to help Seiji confess to Shou.

Given the setup of the characters, it’s easy to see what can happen in the relationships. But the great thing about this manga is that it doesn’t go overboard with the drama. In fact, the pacing and development are very believable, if not relatable.

So, if you’re a guy tired of dragging, dramatic, fluffy romances, this one is for you. The characters are well fleshed out and they handle situations maturely. While they are not perfect, they at least act their age. And in these strengths, the overall plot and manga become enjoyable.

This manga tells the story of two childhood friends, Takuma and Mayu. They met when they were 8 years old. Takuma has a heart condition and Mayu is the daughter of his doctor.

As Takuma keeps getting hospitalized, the two spend a lot of time together and grow close. Hence, we watch them mature as they deepen their bond through the years. There are time skips, but the plot hits its pace once they are in middle school.

The two fall in love, and they even share their first kiss. But after a while, Takuma had to pretend not to love her. He would ᴅɪᴇ before 20, the prognosis said, and he was already 16. He is afraid that acting on his feelings would cause greater pain for Mayu because of his condition.

The story is mostly told from Takuma’s perspective. This reveals to us his conflicting thoughts and emotions. It also shows us the depth of his love and pain, as he tries to work through them. He’s just trying to do what’s best for the woman he loves, or so he thinks.

Most of us know what it’s like to love and have to navigate the obstacles that come our way. Yet at the young age of our main characters, they take it to a whole new level. If you’re looking for a romance to tug on your heartstrings and make you cry, this is the one.

What is your favorite romance manga for guys?