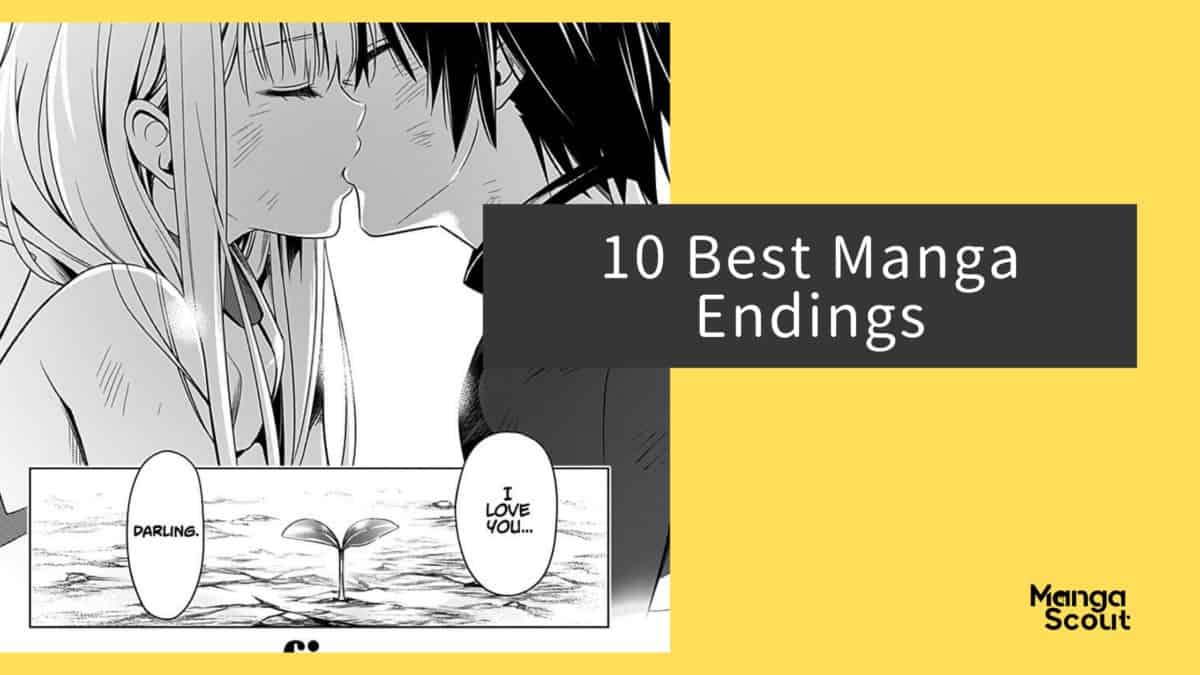 Nothing is more satisfying than a good manga ending.

It makes it feel like the time you invested into reading the manga is worth it. On the flip side, nothing angers fans more than an unsatisfactory manga ending. No one likes loose ends.

In this article, we will present ten manga with the best endings. They’re the best in the sense that they close the story properly. They made sense considering the journey of the characters. However, this does not mean that they’re all necessarily happy endings.

I know listing just ten mangas like that is a tall order, but each one deserves its place on this list. Read on to find out what these are!

Koe no Katachi is a wonderfully written manga by Yoshitoki Oima. It started as a one-shot but went on for seven volumes from 2013 to 2014.

The manga tells the story of a former bully and the young girl he bullied. It’s a tale of repentance, romance, and redemption. These are not common themes in the manga; hence, they received much attention and acclamation.

Thankfully, the manga lives up to the hype. Shoya and Shouko end up growing into their persons. They knew that they would become codependent if they stuck together after graduating. This would make them unhealthy. So, they separated so that they could become independent adults.

But we are shown that they reunited after a while. They walked into the coming age of ceremony hand in hand, now qualified to be partners.

It’s the perfect ending as it brings all the self-development throughout the series to fruition.

Emma is a historical romance written by Kaoru Mori. It follows the life of Emma, a housemaid who falls in love with someone belonging to upper society. It has ten volumes and ran from 2002 to 2006.

At the time, being with someone of a lower class was not just looked down upon. It also risked the future and prosperity of the entire family line. Hence, we see Emma and William go through many struggles.

The manga ended with Emma and William’s wedding. But it’s not a fairytale ending without hardship, which makes it extraordinary. It captures the reality and tension of a situation like theirs.

William’s sister does not say a word to Emma, and his friends don’t know who he’s marrying. Emma has to navigate the world of a competitive upper society. Yet still, it is hopeful. They fought for their love knowing the odds and what they had to give up. That’s the best part of it.

Fruits Basket is a famous shoujo manga, and it remains a classic to this day. It ran from 1998 to 26 with 23 volumes and told the story of Tohru and the Sohma family.

There are love triangles, family conflicts, and many zodiac fantasies going on. Yet it ends on a heartwarming note: all the characters get their happy ending against all odds.

This is great because the ending doesn’t feel rushed or forced. They just come to that point naturally, as dictated by their journeys. The curse is broken, and everyone’s lives unfold for the better.

Full Metal Alchemist is a best-selling shounen series, and for good reason. The narrative was well done throughout the entire 27 volumes, from cover to cover. It starts with a bang and ends on a very satisfying note, with every loose end neatly tied.

For one, all the characters get to their peaceful ending organically. The story’s theme always revolved around sacrifice, and they employed this up until the end. Hohenheim was about to sacrifice himself for Al. Ed sacrificed his alchemy. They understood that life was more than power, and in the end, Ed got Winry.

All the elements in the story were properly weaved together and the story’s close felt natural.

Assassination Classroom is a science fiction comedy manga by Yutsei Matsui. It follows the students and adviser of Classroom 3-E.

They are the would-be assassins and the to-be assassinated. Koro-sensei teaches them all the ways of assassination. Meanwhile, Nagisa emerges as the main character. The classes grow together, and they grow to know more about this sensei they’re supposed to kill.

The ending is as expected, but seeing it play out as fans dreamed of is an amazing experience. Koro-sensei may have passed on, but his impact on the students remains.

Hoshi no Samidare is a seinen manga released from 2005 to 2010 by Satoshi Mizukami. It’s about a college student who was chosen to become a Biscuit Knight. The storytelling was solid throughout, but it really shone in the last few chapters.

All the nuances, foreshadowing, and plot progression came together magnificently in the end. No plot point was wasted. Satoshi constantly pointed back to previous details and point signs. This established the connectivity of the story.

Samidare’s confrontation with Yuuhi was foreshadowed in the very first chapter. Sami fought to live when the odds were stacked against her. The character development through the entire series came to a head.

Monster is a crime thriller manga by Naoki Urasawa. It ran from 1994 to 2001 and has 18 volumes. It is a cult classic that deals with psychological and philosophical themes. This made it a layered story that was a lot to untangle.

The ending was circular, as Tenma and Johan show us who the true monsters are and where the hope lies. It was a fitting conclusion to both their stories.

8.) Your Lie In April Manga Ending

Your Lie in April is a slice of life romantic drama written by Naoshi Arakawa. It ran from 2011 to 2015 with 11 volumes and has multiple adaptations.

It tells the story of two teenage musicians named Kaori and Kosei. Their journey occurs in spring, but it’s not reminiscent of the sparkling teenage dream. Instead, they struggle and fight for their dreams and lives.

Now, the ending isn’t happy, but it was done incredibly well. It was heartbreaking. It captured tragedy, young love, and the bittersweet pain of moving on. The lives Kaori touched were forever changed, and that got to be her legacy.

It tells the tale of Shigeo, an average middle schooler who is actually a very powerful esper. What makes the ending nice is that the final chapter captured what seemed like a regular day. The Mob got annoyed at Sagawa. Teru felt jealous of Mob’s girlfriend. Serizawa was doing great.

All these small details add up to the most heartwarming end. Then there’s Tome disrespecting Reigen over the phone, making readers come to full circle.

Aria is a fantasy manga that ran from 2002 to 2008. It was written by Kozue Amano and had eight volumes. It is a story set in the future on Mars, now called Aqua.

The story is centered on Akari, a woman from Manhome (previously Earth). It documents her exploration and growth on this new planet. It’s a slice of life, except it’s set in another world and documents unique, everyday events.

The manga ends with Akari working in Aria company with her friends. She has adjusted happily to her new life and is excited about her day-to-day. This ending captures the overall tone of the manga and amplifies it.

What is the best manga ending you’ve ever read?

Whatever your answer is, let’s hear to it in the comments below.