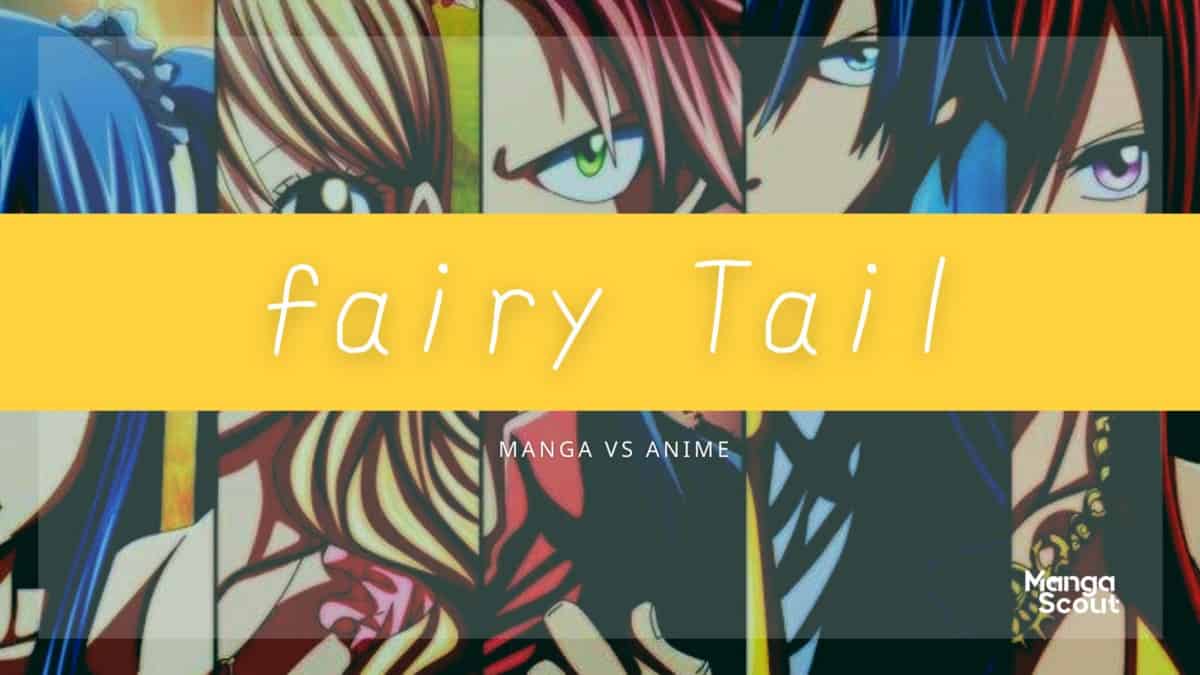 K.D.WilsonManga ExplainedNo Comments on Fairy Tail Manga vs. Anime : All the differences

Fairy Tail is a best-selling series serialized in the Kodansha Weekly Shounen Magazine. It was named the Best New Shounen Manga of 2008. The anime adaptation also received recognition. It won Animax’s Anime of the Year in 2010.

The Fairy Tail manga was released in 2006 and production ran until 2017. Meanwhile, the anime adaptation was first released in 2009. The anime series ended in 2019.

We can see that the manga and anime were produced close to each other. Hence, there had to be some nuances to keep audiences interested. Let’s get into it!

It is also worth noting that the Fairy Tail anime adaptation spans nine seasons. The first season contains a whopping 48 episodes, which is already a lot. But then there’s season 7, which contains three story arcs. Hence, it ended up having 90 episodes.

This was followed by season 8, with only 12 episodes. This was the anime’s shortest season as most of the other seasons contain 24 or 25 episodes.

Meanwhile, the manga only ran for 63 volumes, with a total of 545 chapters. Each volume contained an average of 9 chapters.

When we think of shounen anime, we think of vibrant, action-packed fight scenes. But a lot of these are actually censored for a younger audience. Shounen caters to a demographic of teenagers under 18, after all.

So, even if the manga contains gore and bloody fight scenes, the anime will not depict this. It will still show the fight sequence, but without the intensity and brutality showed in the manga.

For example, in episode two of the anime, Mirajane was crushed by Elfan in a comedic manner. In the manga, what happened was that she was hit on the head with a glass bottle and she ended up bleeding.

There is also this fight between Gajeel and Grimoire Heart:

In the manga, we can already see a lot of bruises. However, there is barely any scratch on him in the anime.

3.) The manga contains more fan service than the anime

Now, the thing is, the Fairy Tail anime would seem like it does contain a lot of fan service as it is. Just look at Lucy in this scene:

Despite this, the anime still filters some stuff out. For example, in the following scene, Lucy’s blanket slipped off her body. But, in the anime, they kept it on her:

4.) The art styles of the manga and anime are different

The manga was drawn by Hiro Mashima, and fans rave over his illustrations. They are extremely detailed and well-done, and even if they have no color, they still convey a lot of emotion.

Just look at this image:

Though this isn’t to say that the anime art is horrible. It just lacks the punch and intricacy that the manga drawings have.

5.) The anime OST adds to the overall experience. The manga doesn’t have a soundtrack

One thing that the anime has is the OST, which fans really like. There are 52 theme songs in total, 26 opening themes and 26 ending themes. These songs also play during action-packed moments.

This helped enhance the experience of viewers. Meanwhile, the manga did not contain soundtracks or even soundbites.

6.) The manga is the source material, the anime contains fillers

The Fairy Tail anime came out not long after the manga. Because of this, there were times when the adaptation would catch up to the source material.

To avoid this from happening, the anime came out with filler episodes.

7.) The anime stretches out some of the fight scenes from the manga

Because it is an animation, the anime gets to build on and extend fight scenes. More movements and conflict are added, which means more action for viewers.

Whether they did this to draw out the episode time or if it’s an artistic decision is of little matter. At the end of the day, fans like this about the anime.

Good examples of this are the fight vs Laxus and Jura or GMG Natsu’s last fight in the tournament.

8.) The manga shows Gray smoking. The anime does not

In the manga, Gray is shown smoking in public. This was done to add an edge to his character. However, the fact of the matter is that he is just a 17-year-old and is not a good example for other teenagers.

Consider how he appears in this panel:

Because of this, they censored the scenes of Gray smoking from the anime.

9.) The island is called Sirius in the release of the manga.

This is referred to as Tenrou Island in the anime.

A whole arc is dedicated to the Tenrou island, spanning 26 episodes or 53 chapters.

Tenrou is spelled as 天狼 in Chinese, and it translates to the Sirius star. This is why the official English manga translates Tenrou Island to Sirius Island.

However, fan translations still refer to it as Tenrou Island.

10.) The manga follows spin-off stories. The anime does not.

All of these were released in different manga magazines and none of them were adapted to anime.

Here’s a table summary of the differences between the Fairy Tail anime and manga:

The Fairy Tail anime adaptation almost faithfully follows the manga. That is, save for a few details. However, these seemingly small details end up affecting the overall preferences of fans. For example, some fans prefer anime because it doesn’t contain as much fan service. Others prefer the manga for the exact opposite reason.

Hence, there is a format of Fairy Tail perfect for everyone.

What version of Fairy Tail do you prefer?

Fairy Tail Manga vs. Anime : All the differences