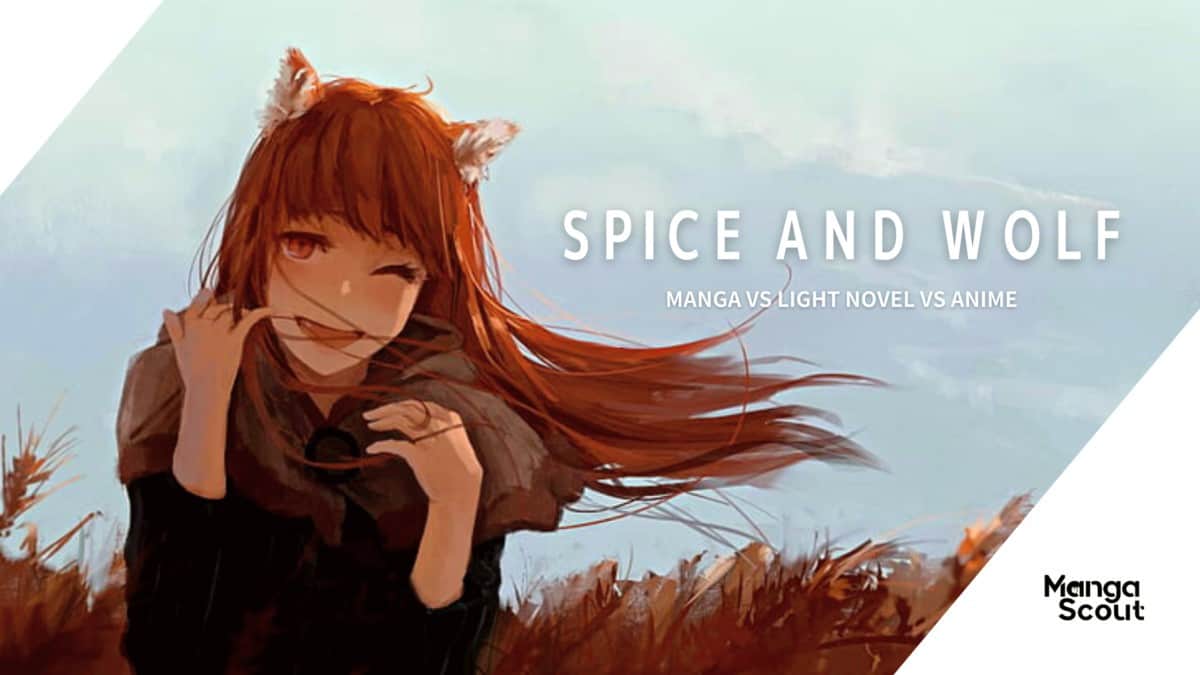 K.D.WilsonManga Explained1 Comment on Spice and Wolf Manga vs. Light Novel vs. Anime

Spice and Wolf is a bestselling shounen series across multiple media formats. It even has video games and internet radio shows fashioned after it! Its fantasy storyline stands on its own. It’s unique in that it focuses on economics and trade instead of the usual magic elements.

Spice and Wolf was first released in light novel format on February 2006. This is followed by the manga release on September 2007. Meanwhile, the anime came out in January 2008.

These formats were released consecutively, showing that the series had a strong fanbase. After all, if the base story is the same, people would get sick of it eventually. But they didn’t.

Read on to find out why!

1.) The light novel is still ongoing with 23 volumes. The manga is finished and it only has 16 volumes.

Adaptations usually trail after the source material. This means that if a manga is based on a light novel, the novel will finish long before the manga.

However, this has not been true for Spice and Wolf. The manga finished in 2017, but the light novel is still ongoing. This is because the main story being adapted by the manga was already completed by then.

The latest volumes of the light novel revolve around a spin-off. Accordingly, the manga did not feel the need to adapt to these anymore.

2.) The manga moves around a lot of the events and characters.

Like the source material, the light novel contains every detail and event. It is paced however fast or slow the novel writer wants.

The manga is a highly abridged and altered version of the light novel.

3.) The manga and light novels have different illustrators, resulting in varying art styles.

The art for the Spice and Wolf manga was done by Keito Koume. Meanwhile, the artist for the light novels is Yu Arakura.

Now, a lot of fans much prefer the art of the manga. However, that is not to say that the light novel art isn’t good. It’s just that the manga art captures the details well.

Here’s an example of the light novel cover art:

And here’s an example of the manga cover art:

From there, you can see the difference in the lining, shading, and overall quality. The manga also portrays landscape, backdrops, and imagery beautifully.

4.) The thoughts and motivations of the characters are more fleshed out in the light novel.

As mentioned earlier, the manga had to skip out on a lot of details. This includes the introspections and motives of the characters. The manga had to convey certain thoughts through facial expressions and body language.

But the light novel fleshes all of these out by showing us the perspectives of the characters.

4.) The manga contains more fan service than the light novel.

Whether this is a good or a bad thing will depend on the reader’s preferences. Some fans complained about how Holo was sexualized by the manga illustrations. She was often caught in revealing situations. Further, the drawings leaned towards fan service by showing more details of her body.

Meanwhile, the light novel art centered on her childlike traits.

Here’s a panel from Chapter 41 of the manga:

Spice and Wolf Manga vs. Anime

Both the anime and manga skipped out on volumes of the light novels. They also seemed to alternate in doing so. While both adapted volumes 1 and 2, they no longer overlapped thereafter.

2.) The relationship between Holo and Lawrence is cuter in the manga than in the anime.

Though the manga does not perfectly capture their relationship like the light novel, it still does a better job than the anime. Because the anime had the most limited number of scenes, it failed to show the depth of their dynamic.

3.) The manga drawings are more detailed than the anime drawings.

Much like light novel art, anime drawings are more simplistic compared to the manga.

Here’s a good example of the same scene being captured in anime and manga form:

As you can see, the manga drawing is more detailed and intricate. The only advantage of the anime is that it comes in color.

1.) The anime struggles to show the internal struggles of the characters, even more so than the manga.

Some people think that anime does a better job at capturing internal processing than manga. They believe that since anime includes dialogue and movement, these are properly portrayed.

However, this is not the case. As mentioned earlier, the Spice and Wolf anime cut out a lot of scenes.

This means that a lot of the other scenes were also moved around. This didn’t leave much room to expound on the thoughts of the characters. Instead, the focus was on moving the plot along.

2.) The entire season two of the anime is not in the manga.

The Spice and Wolf light novel, manga, and anime all differ from one another. It’s not just that they tell the story through different mediums. They straight up tell the story differently. They follow different plot lines and they even change up the events and characters.

Because of this, the fans get a different experience for whichever format they choose to go with.

What version of Spice and Wolf do you prefer?

Spice and Wolf Manga vs. Light Novel vs. Anime

One thought on “Spice and Wolf Manga vs. Light Novel vs. Anime”