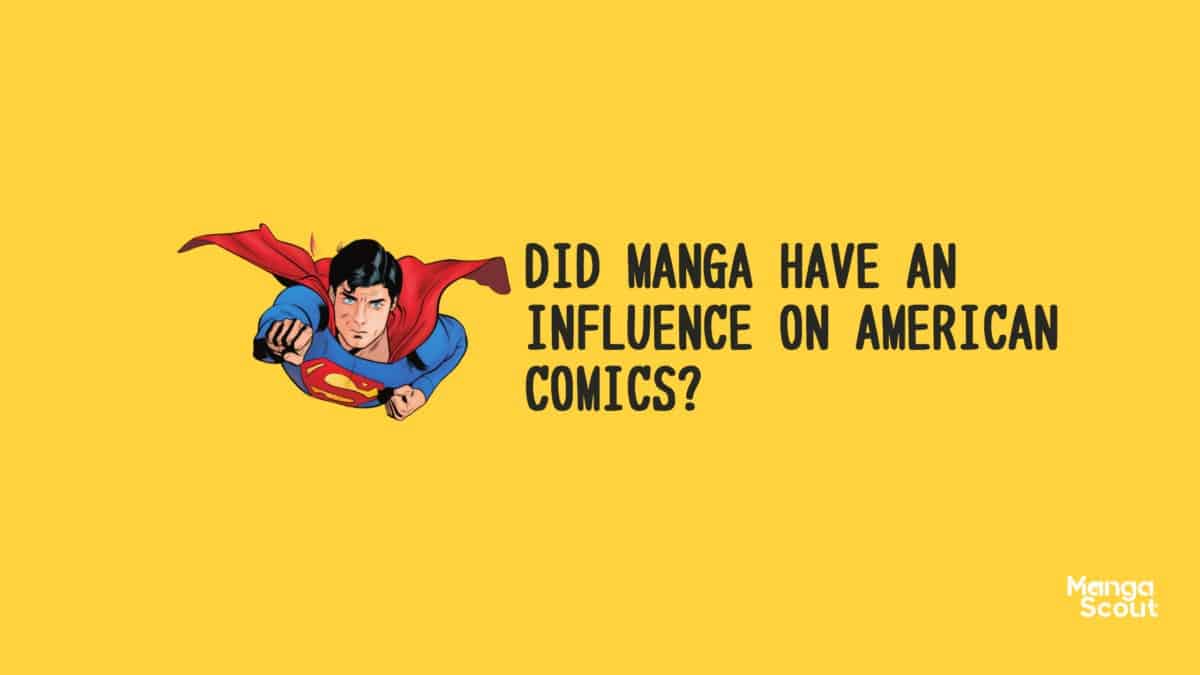 K.D.WilsonIndustry HelpNo Comments on Did Manga Have Influence on American Comics?

For the longest time, manga seems to have trailed behind American comics. In fact, manga was initially viewed as inferior to American comics by Westerners. Yet the times have shifted, and manga sales now trump American comics sales globally.

Did manga have an influence on America Comics? Manga has indeed influenced American comics. This is particularly true for art styles, genres, and even storylines. Comics artists even look to manga for inspiration when they feel like they’re stuck in a creative rut.

In this article, we will get into how manga and anime have influenced America and its art industry.

How has manga-influenced American comics?

When you think about it, the origins of manga and American comics are the same. Both started out as cheap and accessible means of entertainment.

However, due to their cultural backgrounds, they were divergent from the very start. And eventually, both took on very distinct features. Manga catered to the Japanese taste, while comics catered to the Western-style.

Given global mindsets at the time, American comics were viewed as superior to manga. Marvel and DC superheroes were all the rage. Meanwhile, humorous comics like Archie were taking over the world by storm.

Then, interestingly enough, a shift happened in the 21st century. Globalization occurred. People were becoming tired of the repetitive themes in American comics. Minds opened up to new cultures.

Here came in manga. People were enraptured by the wide array of genres and the assortment of characters. American comics seemed never-ending with the same main character in different universes. In contrast, manga generally followed the journey of a person or group, and that’s it.

How you may ask?

The art style of manga is very distinct. Wide eyes, exaggerated expressions, stylistic sounds, and speech bubbles. One can look at a panel and immediately identify whether it’s manga or not.

However, the past years have seen some American comics take on manga-like features and art. Just consider the following panel from Teen Titans:

Such wide eyes and cute features are considered hallmarks of manga. Yet here, we can see that it is also being used in American comics. The only difference is that American comics are colored. Meanwhile, manga remains black and white.

While there are multiple genres of American comics, superheroes take the forefront. There aren’t really slice-of-life comics like in manga. There is also a lack of humor in most American comics, as there is a preference for dark storylines.

But the popularity of manga helped bring back light-hearted stories to American comics. Now, there still aren’t high school romance-based storylines like in manga just yet. But, it is seen that they are now open to that kind of market.

There used to be the notion that only geeks read comics in America. But in Japan, manga is read by most people. This includes housewives, students, and regular employees – not just nerds.

Now, manga has taken over the American market. Accordingly, more and more of the general public has embraced the medium of comics. They no longer think that it’s just for geeks and nerds. In fact, even popular teenagers are jumping on the bandwagon. Suddenly, it has become cool to like comics, superheroes, and manga.

While this can be credited to the shift in a generation, we can also trace it to the wide acceptance of manga. Now, more audiences can read comics without having to struggle with public perception.

How Has Anime Influenced America?

Manga is widely popular in America, but anime is even more widespread. Now, manga has had a significant influence on American comics. But we can go as far to say that anime has even influenced American culture.

Anime has made America more accepting of differences

The rise is interesting because anime used to be thought of as childish. Yet its acceptance has encouraged diversity and openness. This doesn’t just apply to different cultures. This also applies to different ideas, personalities, and themes.

There are certain values that matter to the Japanese, but not as much to Americans. But because of anime, more Westerners understand how to properly respect these nuances.

Now, whether this is good or bad will depend on your perception. For the most part, America has admittedly white-washed its anime remakes. Regardless though, this means that there is a greater interest in the stories of anime. The themes were groundbreaking enough that they could not be simply mimicked. They had to be recreated.

Here’s a look at the rather infamous Cowboy Bebop remake:

And, even with this, there are aspects of Japanese culture they are still able to preserve.

Many anime fans in America go on to participate in conventions. They wear costumes of their favorite characters. They buy large amounts of anime merchandise. They bring anime shows on the Netflix Top 10 list. In this sense, anime has already wielded soft power over America.

And today, we have several anime-inspired cartoons in America. For example, we have the much-loved Avatar: The Last Airbender. There is also Teen Titans and Powerpuff Girls.

In some shape or form, anime has influenced America – far beyond the expected and obvious.

Scott Pilgrim vs the World by Bryan Lee O’ Malley

Scott Pilgrim follows the story of a man who needs to defeat seven “villains” in order to win the girl of his dreams. According to the author, the premise and art are both inspired by manga.

He initially wanted to write a shonen-style comic. Therefore, he fully embraced the manga aesthetic. Hence, the comics were first released in black and white, from 2004 to 2010. A colored version followed in 2012.

Avatar: The Last Airbender and Avatar: The Legend of Korra have spin-offs. We already know that their cartoons have anime themes. Hence, it’s unsurprising that the comics are manga-inspired.

The artwork, morals, and themes are Asian. Accordingly, even the storylines are very reminiscent of manga fantasies. The only difference is that the Avatar comics are colored.

We have already established that manga has become increasingly popular. In response to this, Marvel Comics did an alternate universe that is manga-inspired.

The artwork is noticeably manga-fied. Here, we get to see a mecha-inspired Iron Man!

Batman and the Justice League manga

Not to be outdone, DC Comics also released a manga-inspired line. This version revolves around a Japanese main character. It is also read from left to right, just like manga.

This comic revolves around a young girl who struggles with life. So, she retreats to a fantasy world of monsters and magic.

I Kill Giants was named one of the top 10 comics in 2009 by New York magazine.

What do you prefer, manga or American comics?

Did Manga Have Influence on American Comics?