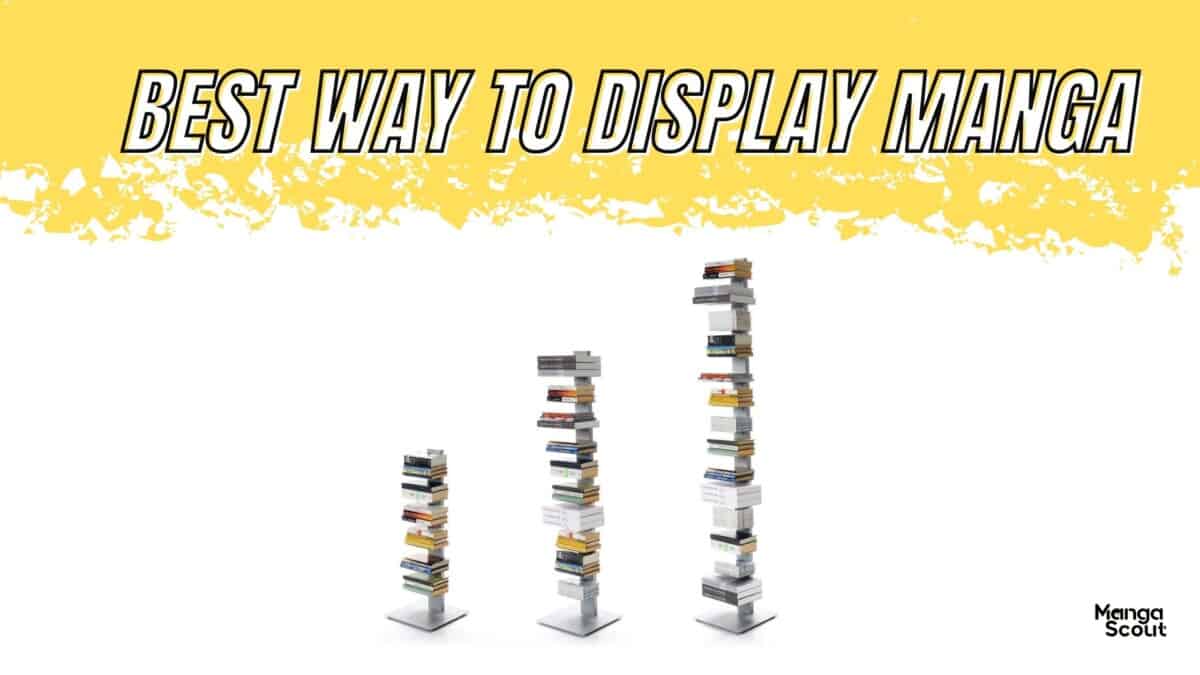 Are you slowly building up your manga collection? If so, then you probably have an idea of how you want to display your tankobons. But did you know that the more tankobons you have, the more difficult it is to organize them?

The best way to display manga is by using bookshelves. It is important that your shelves are able to cater to the size of your manga collection and accommodate the dimensional sizes of your manga books.

In this article, we will look at several ways you can organize your manga on your bookshelves.

You may be the type of person who just wants to pile books up on top of your desk. After all, bookshelves come at a price. It would be more cost-efficient to just leave your manga in a box after reading them.

However, bookshelves are a great investment. Why?

Bookshelves will store your manga collection for many years to come. You don’t have to worry about digging up manga boxes from your attic. You know where all the titles are, should you choose to re-read an old favorite.

Bookshelves help you save space

At first, bookshelves may seem like they take up a lot of space. However, there are different kinds of bookshelves.

For example, there are hanging shelves, which you can just mount on the wall. These kinds of shelves don’t take up floor space. Hence, they are perfect for small condominiums and apartments.

There are also small shelves, that you can just insert into the corner of a room. There are even bookshelves that you can fit underneath the staircase.

Bookshelves are an extension of you

Not all bookcases are meant to save space. Some bookshelves take up a large amount of space. Nonetheless, if that’s how you want to curate your area, then it’s perfectly fine. After all, bookshelves are supposed to reflect your personality. They should fit the design of your place.

So, if you want to buy a bookshelf that is as big as a tree, that’s completely fine. When your manga are displayed on a bookshelf that you like, I guarantee that you’ll enjoy looking at them every day.1.

Bookshelves can be used for other things

The great thing about bookshelves is that they don’t have to be used completely for manga. If you still have space there, you can allow an area for your anime figures or your Funko pops.

And let’s say that you suddenly decide along the way that you want a different bookshelf. You can still use your past bookshelf to store novelty items and other collectibles. You can even use it to store bags or stationery. The possibilities are endless!

Bookshelves help you organize your manga

It may be easier to just leave your tankobons haphazardly in different storage boxes. However, this would make it difficult to remember where you placed what.

The point of buying your own manga is you can read it anytime you want. Bookshelves will help you do this.

You can simply place all your manga in your chosen bookshelf. This way, you can see all the titles that you have. You also get to arrange them in a manner that works for you. You can do it by color, by size, by title – it all depends on you!

How do You Organize Manga on the Shelf?

Of course, you may need some ideas on how to organize your manga.

You organize manga on a shelf by arranging your manga by series and genre. For example, you would put all the action shounen together on one shelf and the shoujo together on another.

Arrange your manga by language

If you’re an avid manga collector, it is possible that you have manga in different languages. If so, then you can just arrange it like this:

Put the Japanese manga on the top shelves. These are followed by manga that has been translated into English. Lastly, you can put the manga that was originally published in English.

Arrange your manga by series and volume

This one’s a no-brainer. Just put together all the volumes in one series, then arrange them chronologically.

Arrange your manga by height

Generally, there is a common size for manga. Nonetheless, it really depends on the publisher and the type of manga that you bought. This is especially true for English releases.

For example, the size of a manga from Yen Press is smaller from one released by Tokyopop. Furthermore, omnibus manga are significantly larger than your average tankobon.

Hence, to make things look more appealing, you can begin by having the largest manga volumes on the top shelf. Then you work your way down.

Arrange your manga by color

Tankobons are released in different colors, even when they are from the same series. Just consider this collection of Parasyte manga:

Hence, when they are organized like this, by volume or by series, they don’t look as nice. Of course, some other manga has plain white spines with the title, like One Punch Man. Those are easier to arrange.

Regardless, a manga collection arranged by the spine color would look pleasing.

Arrange your manga by the mangaka

A lot of successful mangakas go on to write multiple manga series. For example, you have Takehiko Inoue, who wrote Slam Dunk and Vagabond. So, if you’re a fan who tends to follow the work of specific mangakas, this system would work great for you.

After all, there are times when you know you’re in the mood for Yoshihori Togashi. Other times, you may want to read something by Tsukasa Hojo. If you arrange your mangaka by the mangaka, it would be easier for you to locate their manga this way.

This is pretty simple: just arrange your manga in alphabetical order. You can use this in conjunction with the arrangement of mangaka by mangaka or by height.

Arrange your manga by status

Our manga collection is frequently added to by series that are still ongoing. To make things easier for you, you can then arrange the manga based on their status. Put all the completed ones on the upper shelves and put the ongoing ones on the bottom shelves. This way, you can just insert the new volumes at the end of the line.

Arrange your manga by genre

You could be someone who reads a broad spread of genres. If so, you can arrange your manga by genre. If you’re into shoujo the most, make sure that you put them in the area that is easiest for you to reach.

Meanwhile, if you feel like you’ve grown out of the slice of life genre, put them on the top shelf. Arrange them based on how much you like the particular genre.

If you’re a long-time manga fan, you are likely very familiar with the different manga publishers.

For instance, Yen Press has Fruits Basket and Black Butler. Kodansha has Attack on Titan and Seven Deadly Sins. Viz Media has Naruto, My Hero Academia, and Demon Slayer.

With this kind of mastery, it may be easier for you to just arrange your manga based on the publisher.

How would you arrange your manga collection?