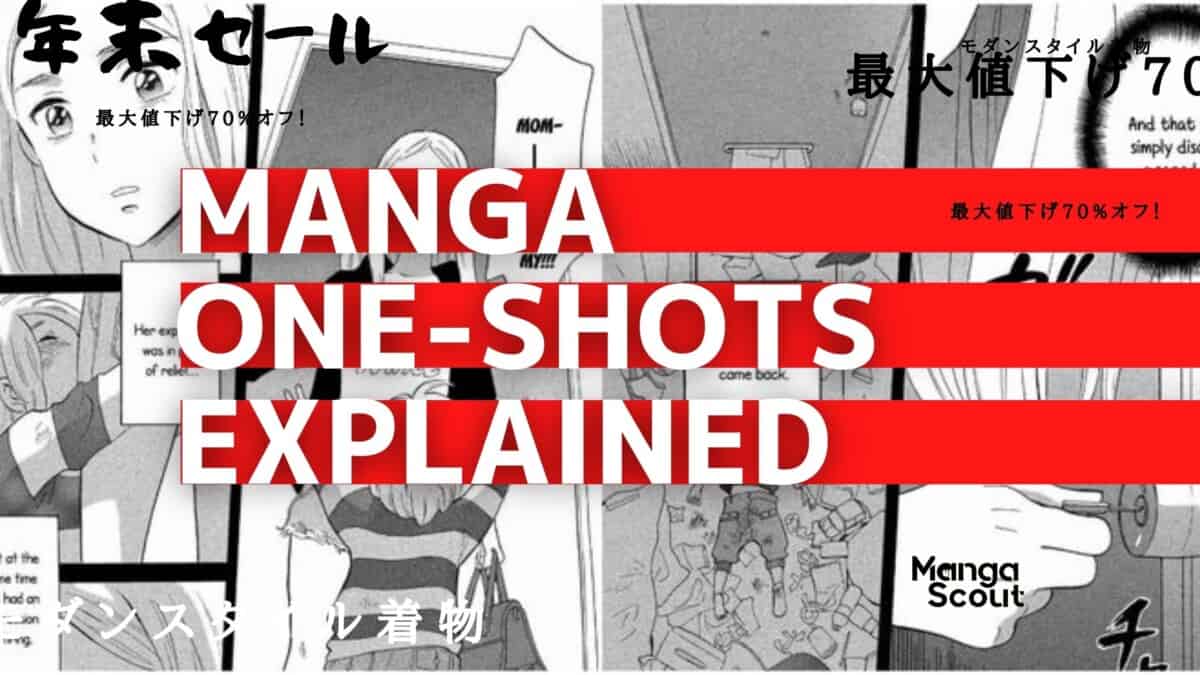 K.D.WilsonManga Explainedmanga, one shot2 Comments on What is a Manga One-Shot?

Do you want to start reading mangas but are too daunted to commit to a story that is hundreds of chapters long? Or are you an inspiring comic creator looking to break into the manga industry.

A manga one-shot is the perfect starting point for you.

What is a manga one-shot? Also called yomikiri, a manga one-shot is a type of manga containing a standalone short story. It is either printed as an anthology or distributed as doujinshi in comic cons. If the one-shot becomes popular, it has the opportunity to become a full-length manga. But, most mangas never go beyond this point.

What Is The Purpose of a One-Shot Manga?

Aspiring mangakas usually write a manga one-shot. It is then submitted to contests or presented as sample work. Publishers use one-shot mangas to test an audience’s reception to a particular story. It is also used to gauge whether a mangaka’s writing and art style will be well-received. If a one-shot manga is well-received, the mangaka has the opportunity to serialize the work.

But one-shot mangas do not always have to go through official publishers. Some creators choose to self-publish their own yomikiri. They then put these up for sale in comic fairs such as Comiket.

Hopeful manga artists publish a series of one-shots. They believe that each story will help them get their name out. It becomes a matter of quality and quantity. In this sense, they use the volume of one-shot mangas to gain an audience. Then, when they get a fanbase, they begin working on lengthier mangas.

One-shot mangas are not limited to beginners. Well-established mangakas also write yomikiri, but for a different purpose. These mangakas write one-shot mangas because they want to. For many of them, it serves as a form of release.

When mangakas work on a serialized series, they use set characters and expand worlds. In contrast, a one-shot manga allows them to create and express themselves without criticism. They write one-shot manga to get their mind off their current running manga. Thus, unlike most one-shot authors, they have no desire to turn it into a series.

Rumiko Takahashi is one of Japan’s most successful mangakas. She has released ten well-loved, long-running titles and was always busy with work. Yet, in the midst of these, she always found time to release a one-shot manga. She did them to exercise her creativity and because she enjoyed them.

As a chosen medium

A minority of mangakas choose yomikiri as their primary medium.

Junji Ito, who has written 89 one-shot mangas. He was a writer who enjoyed exploring gallows terror in the horror genre.

He believed he could best unleash his ideas in the form of one-shot mangas.

How Long and Short is a Manga One-Shot?

As its name implies, a manga one-shot is limited to one chapter. It can be as short as 15 pages or as long as 60 pages.

For a story to qualify as an authentic one-shot manga, it must contain a proper beginning, middle, and end. A mangaka may have written it as a premise or prologue in the hopes of becoming a fleshed-out manga series. Nonetheless, it should not end on a cliffhanger.

Many of the famous and well-loved mangas today started as one-shots.

Here are a few examples:

In 1997, Naruto was first published as a one-shot on Akamu Jump. The story was about a young boy named Naruto, who could turn into a demon fox. After his father died, raised in a ninja village. This is where he learned several fighting techniques.

When it was finally serialized with Shonen Jump in 1999, much of the premise has changed. In this manga, Naruto is a young ninja who is also the nine-tailed fox named Kurama. He is neither a demon nor does he turn into an actual fox.

The original title of One Piece was “Romance Dawn,” and it started as a one-shot. Though Romance Dawn was still pirate-based, the plot was undeveloped. Further, certain characters like Garp and Shanks were still in their prototype versions.

A year after publishing Romance Dawn, Eiichiro Oda decided to make several changes. Some characters were removed, while others were revised. The final version resulted in what we now know as One Piece.

The one-shot of Death Note was released in Weekly Shonen Jump. It was so well-received that the magazine decided to pick it up for serialization. The official Death Note series then began four months later.

There are virtually no differences between the one-shot and the serialized story. That is, except for a specific rule concerning the Death Eraser.

Before Akira Toriyama came out with Dragon Ball in 1984, he first started with Dragon Boy in 1983. It ran on Fresh Jumo magazine and was 45 pages long.

Check out the eponymous dragon boy.

Gintama first started as a one-shot entitled Samuraider. Much of the setting and elements, like the aliens and the samurais, remain in Gintama.

Sorachi Hideaki, the mangaka, didn’t really like Samuraider. Thus, he changed the main characters when the opportunity for serialization came.

He based the main character of Gintama on another one-shot that he wrote, “Shirokuro.” Shirokuro had two main characters: a black-haired girl whose last name was Sakata and a white-haired man wearing a kimono. For Gintama, he turned this into Sakata Gintomi, a silver-haired man who wears a kimono.

Unfortunately, we are unable to find copies of these one-shots to view.

Tito Kube first submitted Bleach to Weekly Shonen Jump as a one-shot manga. The publisher initially rejected it. But then Akira Toriyama of Dragon Ball intervened and expressed interest.

Thanks to Toriyama’s influence in the manga industry, Shonen Jump soon gave it a chance.

The one-shot is now known as Chapter 00. It is considered canon as the events of Chapter 1 remain connected to its premise. You can then begin your Blech journey.

Kentaro Miura began working on the foundation of Berserk when he was just in college. It took four years before he was finally able to publish his one-shot through Gekkan ComiComi. There, he was able to get second place at the 7th ComiComi’s Manga-School prize. Serialization then began a year later through Hakunsesha’s Monthly Animal House.

The one-shot and the serialized manga have the same ideas and intents. However, specific details such as character design still differ.

If you want to see Guts with longer sideburns, you can check out the one-shot here.

What is your favorite one-shot manga?

What is a Manga One-Shot?

2 thoughts on “What is a Manga One-Shot?”