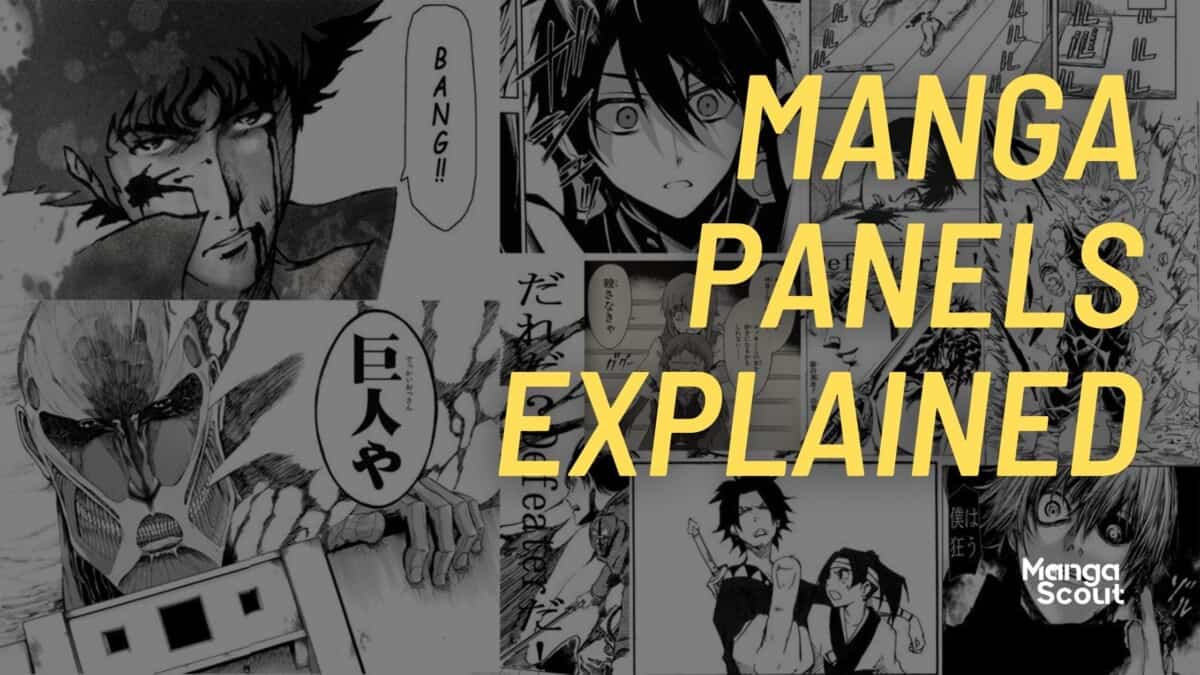 K.D.WilsonManga Explainedmanga panel, mangaka3 Comments on What is a Manga Panel?

If you are beginning to read manga, you may have needed time to adjust to reading from right to left. This is the way artists design manga panels. Indeed, manga panels, while underappreciated, are a distinctive part of manga culture.

Now, there are many ways that a mangaka can present a story. There are also multiple panel styles that he can use.

Read on to find out more.

A mangaka uses a manga panel according to what he wants to convey in the scene. Let’s look at the three common types of manga panels:

It has two possible forms.

The first is when four equal panels stack on top of each other, like this:

The second is when the page divides into quadrants, like so:

Most of the popular mangas are known for their spectacular action sequences. Action sequence panels are a combination of stacked and side-by-site panels and are left up to the artist’s creativity to create. There is no set mold.

This is a page with action sequence panels from Naruto. The number of panels on a page increases or decreases, depending on what’s needed in the movement.

Observe how the number of panels increases while the size of the panel decreases:

The mangaka did this because the scene included quick motions—more panels allowed more opportunities to emphasize the movements.

In comparison, this is a page with action sequence panels from berserk. Observe that here, the number of panels decreases while the size of the panel increases:

When a scene has a point of climax. The larger the panel, the more emphasis on the moment.

When the scene centers on a conversation, simple layouts work best. These panels are square or rectangular so that the focus can be on the text.

Take this page from My Hero Academia as an example:

Unlike action panels, there are few drastic changes for dialogue panels. They’re drawn from a specific perspective per set of dialogue. After a while, the perspective would change, and the mangaka would draw the panels from that new angle.

This is a page from Shigatsu wa Kimi no Uso. Notice how the perspective shifts from Kaori’s to Kousei’s.

Mangakas choose the size of the panel depending on the scene that they are trying to portray. Critical events usually mean larger panels. This would emphasize the details of the scene. They are also used for close-ups and emotional moments. This is to highlight the facial expressions of the characters involved.

Consider this scene from Angel Beats, when Yuri flustered Noda:

Smaller panels are mostly used in action sequences. They are also used for scenes that highlight many characters at the same time.

Take a look at this page from Haikyuu:

⦁ If the scene calls for a group shot, it will likely take a spread or a large panel. The same goes for climax and impact scenes. The bigger the panel, the more that it will catch attention.

⦁ A close-up will take up a mid-sized to a large panel. Scenes that rely on movement and action can use irregular-sized and smaller panels.

How Do Mangakas Break Panel Layouts?

Before anything else, a mangaka has to have an outline. It will allow the artist to clarify what they intend to do with a certain chapter.

This will help him visualize how many moments to include within a given number of pages.

Next, outline to the storyboard. Using this as a basis, he will decide on the dialogues and the pace. It will guide him as he lays out the panels.

1.) Moment-to-moment. This is when the change between panels only occurs within a few seconds.

2.) Action-to-action. This is like moment-to-moment, but it involves a larger movement.

3.) Subject-to-subject. This is used when a certain amount of time has passed between panels. For example, in this first panel, a man could be tinkering with his car. In the next panel, he is already in his car and driving away.

Scene-to-scene. This portrays a change in location or a time skip.

Aspect-to-aspect. This shows the different elements that are happening in a given scene. This is commonly used in action and sports mangas.

Non-sequitur. This occurs when there is no logic for the arrangement of the panels.

After a mangaka decides which transition to use for a certain scene, he will begin working on the grid.

Mangakas most commonly use the 2 x 4 grid layout as the base of their panels. This ensures that the reader will be able to follow the story in a linear manner. Depending on the size of the panels, this layout usually runs between 6-8 panels.

When the scene involves a narrative, there are usually more, smaller panels. When the main character arrives dramatically, he usually takes up one large panel. A few other panels are then added on the side, depending on the transition.

Spreads are full-page images. They are considered the most visually pleasing type of panel. It usually contains an important moment in the story.

The beginning of a manga usually uses two-page spreads. This is to give the reader an idea of the setting and the characters. To this end, you can think of it as the equivalent of an anime opening, except for manga.

Two-page spreads are also used to portray epic moments of battle and victory. Masashi Kishimoto created one well-known spread. It is known as the Shinrai Tensei Manga Panel.

Everyone who has read Naruto Shippuden is probably familiar with this scene:

Two-page spreads can also involve a few panels, not just one.

Tsukasa Hojo breaks his panel layouts according to the level of activity in a scene. In the image below, he is showing us a climax scene from City Hunter. There are five panels over a two-page spread.

How do manga panels pace the story?

The larger a manga panel is, the longer the reader will linger to take in the details. The smaller a panel, the faster a reader will read through and move on to the next panels.

The angle and layout of the panels also influence the pace of the story. Panels that are angled or geometric tend to quicken the reader. This is because they stimulate action and movement. Overlapping panels also speeds up the pace.

Meanwhile, basic horizontal and vertical panels tend to slow a reader down. This is because they are usually correlated to dialogue and foundational scenes.

Lastly, it is important to note that the amount of text in a given panel influences the pacing. Dialogues slow down the pace of the story, while action sequences speed it up.

What is your favorite manga panel? What scene does it portray?

What is a Manga Panel?

3 thoughts on “What is a Manga Panel?”