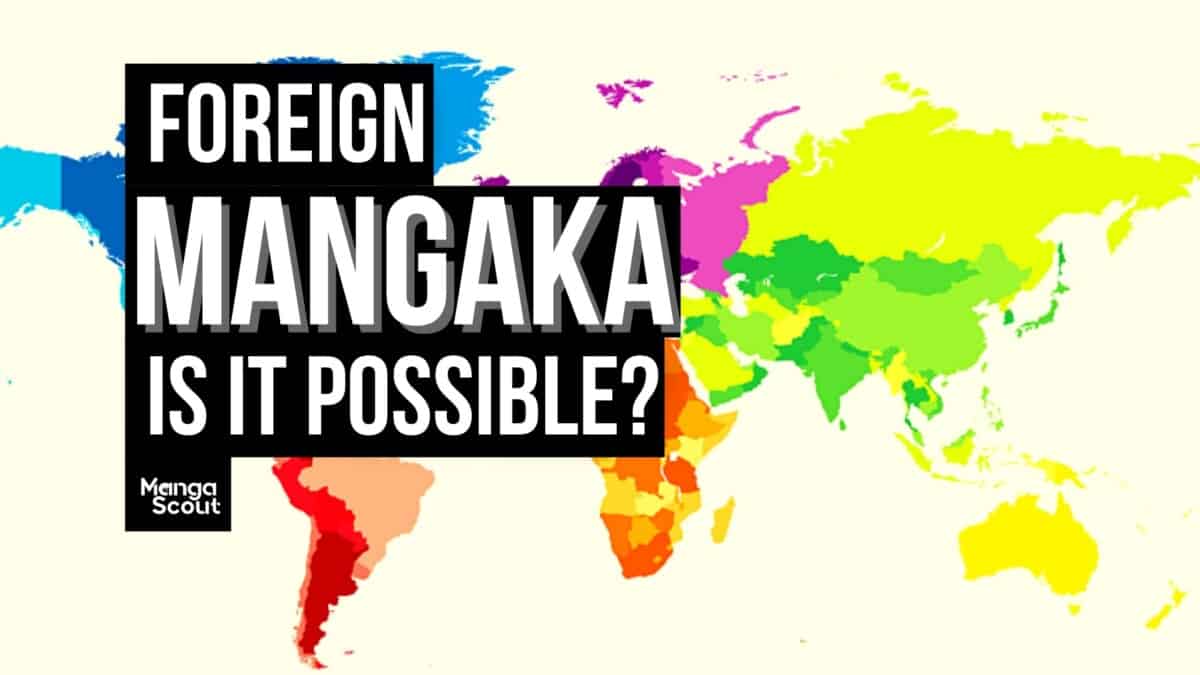 Every single manga artist you see interviewed and portrayed through Japanese media are Japanese. Right? But your hope is to also join the ranks create a manga that hits millions of readers, and live out your dream of becoming a mangaka.

There’s a burning question that many are asking;

But it’s not always a simple yes when it comes to entering a future you are not entirely familiar with.

Let’s dive in and give you a quick run-down on some facts about being a foreign-based mangaka.

Are there any foreign mangaka? Yes and the list is growing

There is an increasing number of foreign-born mangaka in the industry today. That being said, the road to becoming a success in this field isn’t generally seen as an easy one. Classic anime and manga have strong roots in Japanese culture. This has been a cause of contention for a lot of gaijin (or outsiders) attempting to enter the industry.

A Taste of Success

One such success story is that of Swedish-born Asa Ekstrom. She is an artist and mangaka currently residing in Tokyo, Japan, and her first manga, That’s What Asa Found in Japan, was published in 2015. She continued to gain traction in Japan and China by winning the Gaiman Award, a foreign comics contest, that same year.

Ekstrom has since published a second volume of That’s What Asa Found in Japan along with her trilogy Goodbye, September.

Another example of a foreigner becoming a big name in the manga is Tony Valente, a French-born author and mangaka. He is the creator of the French/Japanese series Radiant.

This series is an extremely popular manga in France and its anime series was adapted for TV by Lerche, a branch of the renowned Japanese animation company Studio Hibari.

Of the series we’ve listed, many have become animated TV shows airing throughout the world. And while gaijin mangakas do tend to face more controversy when publishing their works in Japan, the market for foreign-created manga is growing. Countries like South Korea and Brazil are two of the most influential market, with American-born artists soon to follow.

Various television adaptations of foreign manga have helped to bolster the growing fan base of non-Japanese mangaka. Series such as the French-Japanese Ulysses 31, a collaboration of French and Japanese producers/artists and creators, became wildly popular in 1981 and allowed for the introduction of licensed merchandise such as tee-shirts, mugs, and Keshi.

The French connection doesn’t end there either. In Europe, France holds over 40% of the manga market, with 40% of the newest comics released in that country represented manga. With the 1991 showing of internationally acclaimed anime Akira by creator Katsuhiro Otomo, the boom of manga and anime within the French population became unstoppable.

How Hard is it to Become a Mangaka as a Foreinger?

Newcomers to the culture of manga will soon understand that there are several ways to answer how hard it is to become a mangaka as a foreigner. As societal and cultural diversity grows worldwide, many tightly held traditions, while still vigilantly guarded, are opening up doors of opportunity for outside influences.

These doors or opportunities can be seen in the acceptance and popularity of new manga artists, the growing fan base, and the lowering of some industry standards to give more room for outside creators.

While there are still barriers to becoming a non-Japanese mangaka, like general acceptance and adherence to strict traditional methods and public opinion, it’s easier than in years past. With time and perseverance and investing in educational requirements (such as being fluent in Japanese), these barriers are surmountable.

Take the Leap with “Shonen Jump”

Kodansha is just one of several larger companies promoting outside sourced manga series. This strategy has caused a genuine interest among a vast demographic of readers and manga creators alike. Both native-born Japanese mangaka and burgeoning foreign artists are welcoming the chance to grow within the manga market.

Companies like Kodansha have created international competitions and awards aimed at new foreign manga artists. These competitions give outside talent a chance to publish their works within the Japanese market. The International Manga Awards and the Tezuka Award – sponsored by the world-famous Shonen Jump magazine – are two examples of these opportunities.

Both the International Manga Awards and the Tezuka Awards offer the winner the ability to publish their manga, award cash prizes, and provide opportunities to travel to and throughout Japan.

How can I up my Chances in Becoming a Foreign Mangaka?

Getting your foot in the door in any specialized or niche market is never an easy one. There are, however, ways you can build up your skills and experiences to better your chances.

Becoming a mangaka in Japan is certainly not as stigmatized as it once was, with a previous focus on solely Japanese-born authors. That being said, that doesn’t mean you can be any less dedicated to the ‘art’ of becoming a mangaka.

Step One: Classes in Session!

One of the critical steps you can take to start a career as a mangaka foreigner is to educate yourself on Japanese culture. A key feature in being successful in this industry is fluentcy in Japanese.

Enrolling in language courses, cultural studies, and art classes focused on manga/anime art will not only offer enrichment but help you better understand the traditions and history behind manga.

Entering different competitions and self-publications is another way to develop your career.

Taking advantage of international awards such as the Tezuka competition will give you the opportunity to compete with like-minded individuals and market yourself within the industry. This also gives you a more noticeable status within Japan as a reputable mangaka.

Do you think it’s harder to become a foreign mangaka?

What steps would you take to become a mangaka?

Can a Non-Japanese person Become a Mangaka?