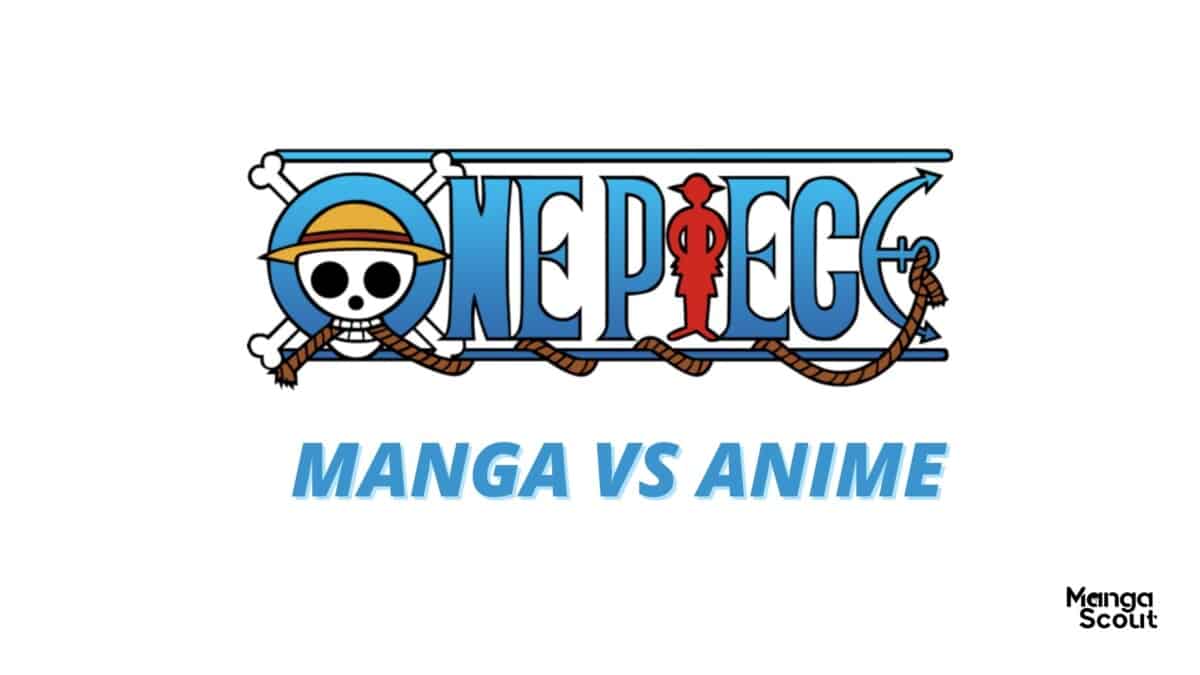 K.D.WilsonManga ExplainedmangaNo Comments on One Piece Manga vs. Anime (12 Differences You Never Notice)

Did you know that the manga of One Piece is the best-selling manga of all time? It was then made into an anime, which some argue is even better than the manga. Other fans disagree. Of course, to say that one is better than the other means differences to consider.

This article will compare the manga and anime of One Piece by Eiichiro Oda. The manga came out in July 1999, and the anime first premiered in October 1999. Both are still ongoing to this day.

Read on to discover how they differ!

1.) The Manga and Anime Start Differently

Luffy meets Koby on a ship in the anime after defeating the pirates. Alvida forces Koby into a raid, and Koby discovers Luffy’s barrel on that ship. Meanwhile, Nami was shown throughout the episode, on the boat, and in the marine base.

Luffy washes up on shore in the manga, where he meets Koby. Luffy recruits Koby and Zoro first. Then, they head towards their next destination, where Nami is first shown.

2.) The Anime Censored Certain Scenes from the Manga

Many of the deviations between the anime and the manga can be chalked up to censored scenes.

Luffy cuts himself with a knife to prove that he’s brave enough to be a pirate in the manga. This is not shown in the anime.

Sanji is shown smoking in the manga after he and Zeff started the Batterie. The anime excludes this.

Like the source material, the manga was ahead of the anime, but not much. So, to extend the gap between the two mediums, the anime put in fillers.

Here’s a table of the filler arcs of One Piece:

The animators even extended the fight scenes to ensure that the anime doesn’t run out of source material. This became more apparent as we got to the later episodes.

For instance, the final clash between Luffy and Doflamingo is more dramatic in the manga. Several fights during the Whole Cake Island Arc were also expanded.

The anime changed the clothing pattern for less emphasis on her curves.

True to shounen form, the manga highlights Vivi’s curves. This is seen most notably in chapters 111 onwards.

In the anime, they changed the pattern on the shirt to avoid accentuating her breasts.

6.) The anime lays out Sabo’s backstory, the manga doesn’t

The episodes after the Dressrosa arc covered Sabo’s backstory in the anime. Interestingly, this was not present in the manga.

Eiichiro said he couldn’t illustrate Sabo’s backstory in the manga due to lack of time. It just wasn’t something he could prioritize. Hence, he gave the draft to the anime staff to work on it.

The extended fight scenes in the anime make the characters look weaker than they indeed are. After all, if they were powerful, they would quickly finish the fights. Winning a battle after a few blows is different than winning after a one-shot.

The anime also made fourth gear seem weaker. In the fight with Doflamingo, he was still able to get in a few blows. In the manga, he was utterly destroyed.

8.) The anime expanded the stories of the Charlotte family members

The Cake Island Arc introduced the Charlotte family. Eiichiro Oda couldn’t feature all of them in the story as large as they are. The anime made up for this.

In the show, most members of the Charlotte family were given ample screentime. Some of them were given a significant role, like Jimbe freeing Luffy. Meanwhile, others were shown in the fight against the Germa.

9.) The manga has little to no plot holes, the anime has several

Eiichiro Oda is known to be very meticulous with his works. As a result, the manga of One Piece is largely well-written with no plot holes.

The anime altered, rearranged, removed, or expanded on some plot points. This resulted in several plot holes.

For example, in the anime’s filler Warship Island Arc, Zoro mentioned nothing he could not cut. But, he was shown to be unable to cut steel until the Arabasta Arc.

Another example is when the crew mentioned that it was their first time to see a dragon in the Punk Hazard Arc. However, they saved Ryu, an old dragon, on the Warship Island Arc over 500 episodes earlier.

10.) The anime contains lengthier flashbacks than the manga

Both the manga and anime of One Piece contain several flashbacks. However, they are considerably dragged out in the anime.

In the manga, they expand on world-building and add to the story. In the anime, they are used to lengthen the story. There’s a difference.

This was most evident in the number of flashbacks they inserted before the Wano arc.

11.) The manga repeatedly uses the one-finger salute, the anime does not

In the manga, the one-finger salute was used to signify mocking or disrespect.

The anime takes out all references to this. In chapter 500 of the manga, Law flashed Kid with the middle finger in this particular scene. In the anime, Law just smirked at Kid.

12.) There is a difference in the art quality of the anime and the manga

There is no denying that the anime brings the manga to life. There is color, movement, and sound, which makes the world of One Piece more immersive.

Regardless, many would argue that the artwork of Eiichiro Oda in the manga is superior. The attention and detail that he put into every panel are astounding. And, as the mangaka, he was able to portray the characters and scenes as depicted in his imagination.

See the Difference for Yourself:

What version of One Piece do you prefer?

One Piece Manga vs. Anime (12 Differences You Never Notice)