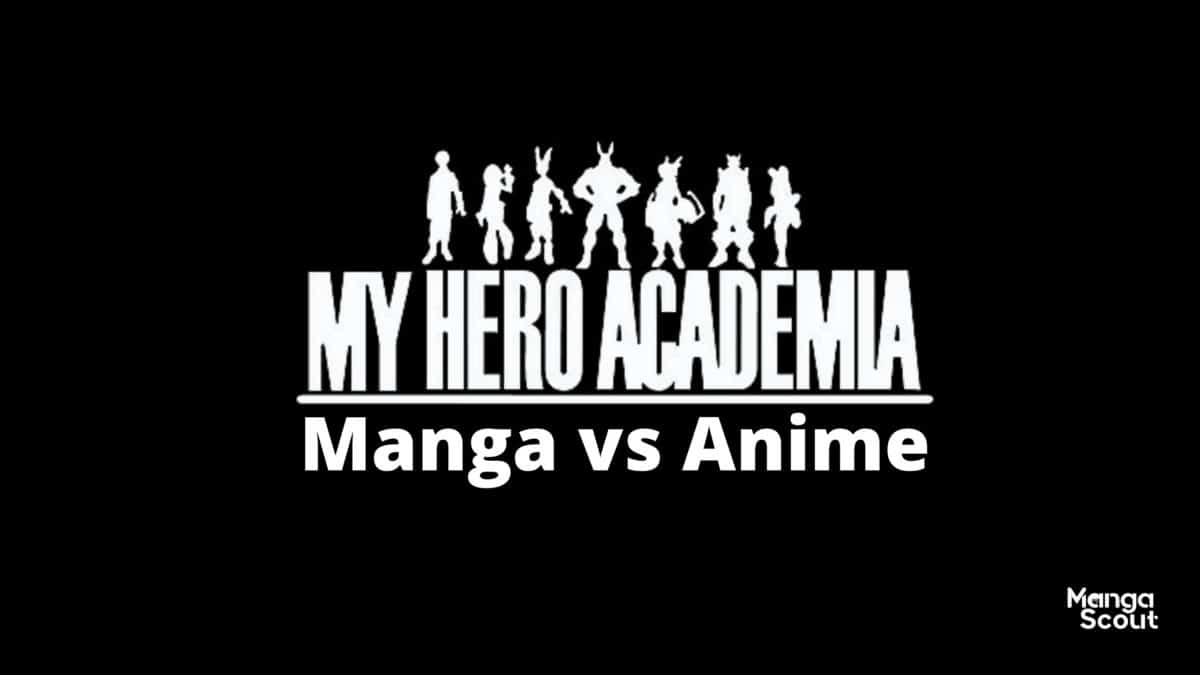 K.D.WilsonManga ExplainedNo Comments on My Hero Academia Manga vs. Anime

My Hero Academia is one of the most well-known anime series today. It has produced a good number of manga spin-offs and movies. There are even talks of a live-action film.

The My Hero Academia manga was first released with Shonen Jump in July 2014. Meanwhile, the anime adaptation came out in April 2016. Both are still ongoing to this day.

The anime is obviously based on the manga, but there are a few notable differences.

Read on to find out what they are!

1.) The anime tends to censor details that are shown in the manga

My Hero Academia is a battle story. As such, it contains numerous fight scenes and has a lot of bodily damage involved.

For instance, we have the fight between All Might and All For One. The manga clearly shows that All Might’s hand was blown off in battle. However, the anime omitted this.

One reason for this is the show’s timeslot in Japan. As a daytime show, more kids are likely to watch it. Hence, they have to adhere to certain graphic restrictions.

2.) The manga does certain fights better than the anime

The manga doesn’t just portray the fight scenes more graphically. It also depicts them more faithfully to the creator’s ideas.

The animation team of the anime can make their own creative decisions. However, sometimes these decisions leave fans a little underwhelmed.

For example, we have the fight between Overhaul and Lemillion. The scenes after Lemillion’s quirk was taken away were shown in slideshow format. The sequence didn’t fully show his struggle.

There is also the time when Deku and Overhaul’s fight was superseded by music. This pulled the viewers out of the scene.

3.) The anime expanded on the Tokoyami vs Yaoyorozu match

To be fair, a fight scene that the anime got right was the Tokoyami vs Yaoyorozu march in season one. In fact, the anime arguably did it better.

This is because that particular fight in the manga was only one panel long. However, the anime dedicated over two minutes to the fight.

Of course, the anime has the upper hand of being colored. But manga readers will say that there is something special about Kohei Horikoshi’s art style.

Just look at this and see for yourself:

5.) The anime didn’t have the pop-culture references of the manga

Anime shows have to be careful about their copyright laws. If they want to mention characters from other franchises, they have to secure the right to do so.

Because of this, there are pop-cultural references in the manga that the anime cannot mimic.

Look at this panel from chapter one of the manga.

If you look at the right panel, you will see some identifiable superheroes. There’s Superman, Spiderman, and Wolverine, among others. The anime certainly did not have a similar, shadowy scene.

There is also this clear Mario reference in chapter 3 of the manga. Present Mic was explaining the rules of the entry exam to the students. To do so, he used terms that are related to the Super Mario Brothers game.

And if that wasn’t enough, he went on to mention the game explicitly.

6.) The manga briefly mentioned cigarettes. The anime does not

Did you know that in the manga, Bakugou’s friends are shown smoking? He told his friends to quit smoking around him, but the anime cut out this scene.

This is because in Japan, portraying smoking to minors in any way is frowned upon.

7.) The anime contains more flashbacks than the manga

This is mostly true for all anime adaptations. The My Hero Academia anime contains far more flashbacks than the manga.

For one, the animators are trying to extend the story so that they don’t catch up to the source material. This is understandable, but then again, My Hero Academia takes it to the next level.

The anime portrays All Might as a passionate, yet kind and patient mentor to Midoriya. The manga doesn’t always present him this way.

In the manga, All Might frequently get mad at Midoriya. He was also portrayed to be so intense that it initially made Midoriya uncomfortable. That’s saying something, given how intense Midoriya could be himself.

Still, their relationship is shown to be affectionate and heartwarming in both mediums.

9.) Aizawa seemed more like a possible antagonist in the anime

During the first few days of Class A in school, it would seem as if Aizawa had a bone to pick with Midoriya. Viewers were cautious of him because it was as if he had the making of an antagonist.

Interestingly enough, this wasn’t as emphasized in the manga.

In the manga, the Quirk Apprehension Test was normal for all students to take on their first day. Everyone knew about it.

But, in the anime, it was portrayed as if it was a surprise test that Aizawa did on his own accord.

Further, in the manga, Aizawa stated that no one was getting expelled. Because of this, the students could view their rankings in peace.

In the anime, Aizawa shows the class their rankings first. This made Midoriya think he was getting expelled for being at the bottom.

10.) Uraraka in the manga and the anime had several differences

In the anime, Uraraka is designed as slim and fit. In contrast, the manga portrayed her as somewhat chubby.

Further, in season 3, Uraraka’s crush on Midoriya seemed to be played up. There was a consistent emphasis on her crush on him. They don’t do this in the manga.

See the Difference for Yourself:

All things considered, the My Hero Academia anime is one of the more faithful adaptations. It stays true to the manga’s storyline and flow, without missing a beat. There are minuscule differences, but this doesn’t affect the progression of the plot.

Because of this, many fans are divided between the two mediums. Some will say that the manga, as the original base of the story, is still better than the anime. Others will say that the anime manages to get them more invested and emotional in the story.

What version of My Hero Academia do you prefer?

My Hero Academia Manga vs. Anime