Like any series based on books, most anime, not all, are based on manga. Mangakas, who write and draw manga, create incredible plots, and then anime studios pick from the available manga based on popularity, storyline, and reputation.

Does anime follow the manga? No, most anime doesn’t follow the manga exactly as written because the anime is normally produced at a faster rate than the manga causing it to stray from the source material.

It may not seem to make much sense, but there are, surprisingly, solid reasons behind this.

Read on ahead to find out why. 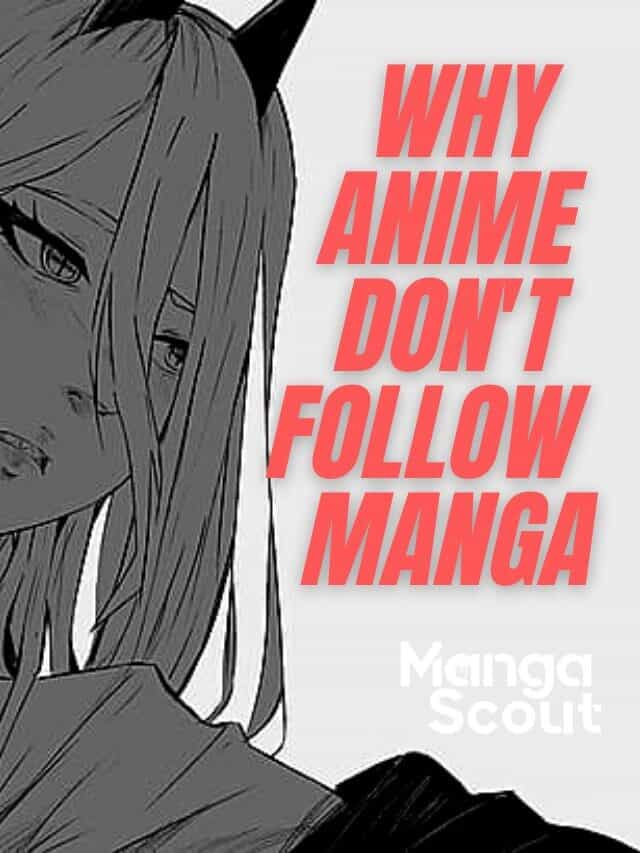 Does Anime Follow the Manga?
By K.D.Wilson
View all stories

1.) The Manga Hasn’t Finished Yet

Usually, the main reason why any anime doesn’t follow its manga is that the manga is still ongoing. Manga is slower to produce than anime, so it’s not rare for a commissioned anime to quickly catch up to the current storyline. If the mangaka were to give away the manga’s ending to the anime producers before the manga concludes, the sales would significantly drop.

So, if an anime has caught up with the manga’s storyline, one of the following happens:

These episodes are classified as ‘non-canon, and you can usually skip these altogether without worrying about missing any of the original action.

However, the king of filler episodes definitely has to be Naruto. You can even find sites that guide you about canon and filler episodes of Naruto, as well as the filler ones that are worth watching.

I know some manga have fillers, but this is excessive.

Most anime are rated either PG-13 or PG-14, so some scenes from the manga have to be altered because they’re either too violent or too sexual for the intended audience.

In Fullmetal Alchemist, many of the dialogues in the anime were different from the manga to make it more child-friendly. Edward, the main protagonist, is far more arrogant and abusive in the manga than in the anime.

The fan-favorite anime, One Piece, also had similar changes made to it. Die-hard manga fans could tell you, Red-Leg Zeff, cutting off his leg to eat it to survive. In the manga, sadly didn’t cut it for the anime.

When an anime is commissioned, television broadcasters assign a fixed number of seasons depending on the manga’s popularity, commercial considerations, content volume, etc. In a single season, there are around 12 – 16 episodes usually. Most of the time, there is too much content to be covered in the manga, so anime producers filter out scenes they deem irrelevant.

Trending anime Horimiya is based on a manga consisting of 16 manga volumes, which have122 manga chapters. The anime, so far, only has a single season of 13 episodes. So many scenes from the manga would have to be ignored, summarized, or altered to complete the storyline in the anime.

Having a large budget for anime production is every fan’s wish; gorgeous animations, vivid scenery, intricate details throughout, memorable soundtracks, a well-rounded plot, etc., But these don’t come cheap. If studios don’t have the budget to factor in all of these and see to the complete story, changes in the plot or shortening of the story have to be done.

Instead of going chapter-by-chapter, the entire manga is summarized, and the storyline is tweaked to fit the anime’s budget.

Anime that Followed the Manga

Just because the anime sometimes swerves from the manga doesn’t mean there aren’t any anime that doesn’t do the original storyline justice. These top 3 popular anime tried their best to stick to the manga and thus became fan favorites. Give these a try!

Fullmetal Alchemist: Brotherhood (FMAB) can be considered a reboot of the Fullmetal Alchemist anime (FMA). Both are based on the same manga, but where FMA diverges from the original storyline, FMAB stays faithful to the manga and thus ranked #1 on My Anime List and is considered one of the best anime of all time. Also an excellent starting point for people new to anime and manga. Check the details of this anime here.

Parasyte -the maxim-a 24-episode long anime that closely followed the manga-is another highly acclaimed, action-packed anime that solidifies the sci-fi genre. This anime will have you at the edge of your seat throughout with unexpected cliffhangers and thought-provoking scenes. You can find all the information regarding this anime here.

Tanjiro’s whole life comes crashing down when demons slaughter his whole family, and his surviving sister is turned into a demon as well. This anime did what many fail to do; take a generic plot and turn it into something that reels fans back in every week.

While there were a few minor differences in the anime, most of the plot and characters were unchanged. You can check the details here.

Sometimes creative freedom and circumstances lead you to take a different direction than your original path. That’s what happened to the following 3 anime that was so different from their manga that they’re almost a whole new story.

Anime fans might argue that the changes made don’t take away much from the story, but it’s actually much more than that. The anime goes really light-handed on the gore and the action to keep the story suitable for young teens. Besides that, the character development and the plot are better defined in the manga.

Not to say the anime is bad, at least not the first season. Don’t even get us started on season two! But, decide for yourself. Check the details of the anime here.

One of the most popular, supernatural anime that was most anime fans’ gateway towards the world of anime. The premise of this anime is unique, and it executes most of it well, till it started to alternate its path from the manga, and eventually getting canceled for this reason as well.

The popularity of this anime most likely got in the animators’ heads since they filled the anime with more fillers than actual story-based episodes. But even then, the anime will always hold a special place in most fans’ hearts. You can find the details here.

Black butler had the potential to be one of the greatest anime out there, with a unique plot, beautiful art, great soundtracks, and well-developed characters. But it fell short because of… you guessed it, not following the original storyline.

The first season was more or less loyal to the manga, but the second season didn’t bother trying. The entire plot was non-canon, and the fans of the manga were very vocal in their dislike. However, without considering the manga, the anime still does stand out in some ways, at least the first season does. Definitely give it a watch and decide for yourself. You can find the details of the anime here.

Hopefully, it makes more sense now why the anime doesn’t stay faithful to the manga many times. However, it doesn’t mean the anime falls short, or you can’t still enjoy it.

What manga have you read that changed totally from the anime?

Whatever your answers are, let’s hear them in the comments below.