There are usually more manga chapters than anime episodes, with just the significant scenes captured in the animation.

How many manga chapters are in anime? A single anime season can cover anywhere between 10-40 chapters. Mangas that are ongoing usually have more chapters covered since their anime adaptations go on for several seasons.

You may observe that some anime series choose to condense a sizable portion of their manga into a single season. This boils down to the contracts established between the mangaka, the publisher, and the animation company. More popular manga series can negotiate better deals with more episodes and seasons.

To better understand how this works, we need to investigate the variations and intricacies of the manga-anime nexus.

Let’s get straight to it. 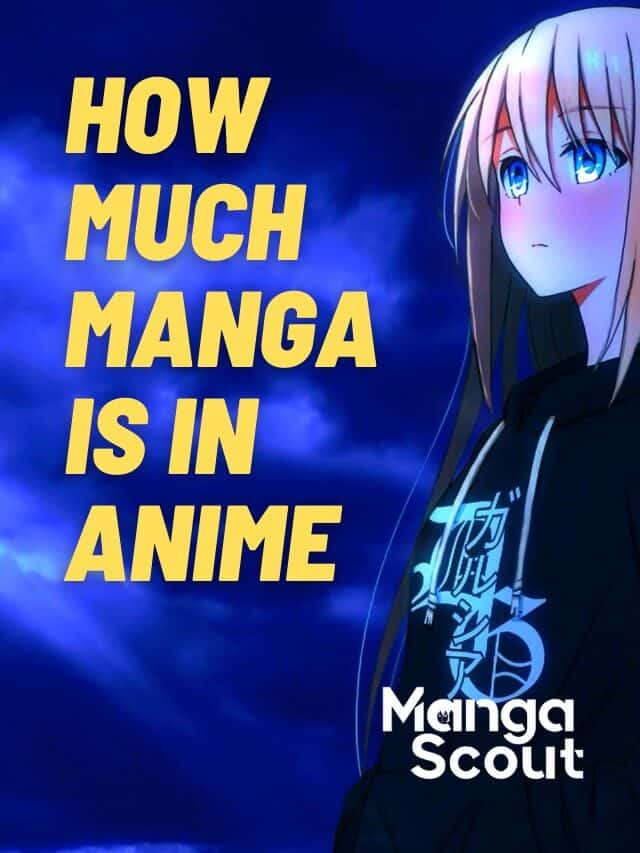 How many chapters are in Anime?
By K.D.Wilson
View all stories

We usually think of show seasons as the secluded run of a series. A show’s season stretches from the first episode to the last episode within a specific time frame. So an anime season equates to 24-26 episodes.

Production companies release one episode per week, and animes generally end with 12-13 episodes per season.

How Many Manga Chapters are in a Season of Anime?

The number of manga chapters covered by one anime season depends on two things:

⦁ The agreed-upon pace of the mangaka and the producer
⦁ Whether the source material is a weekly manga or a monthly manga.

How many manga chapters are in a single season? The standard anime season covers 20-35 chapters of weekly manga or 40-60 chapters of the monthly manga.

Boku Dake ga Inai Machi is a 44-chapter manga that was adapted into a 12-episode anime.

Some anime seasons are classified as double cour, and they consist of 24-26 episodes. Consequently, double cour seasons can contain 40-70 chapters of weekly manga or 20-30 chapters of the monthly manga. You may observe that a lot of popular seinen animes use this format.

Zetseun no Tempest is a manga with 50 chapters. It was produced into a double cour anime with 24 episodes.

How Many Manga Chapters are in a Single Episode of Anime?

On average, an anime episode follows the plot of two manga chapters. Whether the anime producer would choose to flesh out fight scenes or interject flashbacks, it can be more or less.

Let’s see how this average varies across popular titles:

The first seasons of One Piece generally covered 2-4 chapters per episode, and the more recent seasons adapted an average of 1 chapter per episode.

The anime of One Piece varies in the number of manga chapters it portrays in a single episode. For example, the very first episode only featured one chapter, while episode 47 covered 17 chapters. However, the latter is a special case.

The adaptation of Boruto into an anime series is an unusual case since many of the episodes were written by the animation team. It did not follow the narrative crafted by the mangaka.

One episode contains a fraction of a manga chapter, and other details and subplots are added to extend the script. Currently, the anime is on episode 203, and it has only been covered until chapter 36 of the manga. At this rate, it means that you have to watch five to six episodes to get the story of one manga chapter.

The Jujitsu Kaisen anime has an average of 2.63 manga chapters per episode. While there are variations to this, this is one adaptation that stayed true to the story and pace of its canon. The anime follows the sequence of events exactly as they happened in the manga.

For reference, here is a chart of Jujitsu Kaisen manga chapters and their corresponding anime episodes:

The Demon Slayer anime series faithfully portrays two manga chapters per episode. The first season was a double cour with 26 episodes, and it captured the story until the end of manga chapter 52.

The anime adaptation of Black Clover started relatively slow, with an average of 0.77 chapters per episode. For example, the Magic Knights Entrance Arc only had 10 manga chapters, but the anime unfolded the arc over 13 episodes.

However, it eventually picked up its pace, with some episodes eventually covering 2-3 manga chapters. For example, the Heart Kingdom Joint Story Struggle Arc occurred over 32 manga chapters, perfectly portraying it within 10 anime episodes.

The anime had 170 episodes, and it encompassed the story until the end of chapter 260. Overall, the Black Cover anime covered an average of 1.53 chapters per episode.

The average of manga chapters in a My Hero Academia episode varies depending on the season.

You can refer to this table for the breakdown:

You can observe that the average number of chapters covered per episode increases as the seasons go by. This is because fight episodes generally happen over several manga chapters, and the number of battles taken on by Class A has been regularly increasing as they move further along their hero journey.

How Many Manga Volumes are in a Season of Anime?

Sangatsu no Lion has two seasons. The first season portrayed the first 4 manga volumes, while the second season spanned the subsequent 4.5 volumes.

The single-volume manga has a solid plot and sound pacing. Because of this, animation companies are tempted to acquire rights for production, even when it would be difficult to extend the story across a standard anime season.

Here, we can consider what Nexus Studio did with Wakaba Girl, a manga that follows the story of four friends. The company produced a 13-episode series out of this single-volume manga, keeping each episode at 7 minutes. For reference, an average anime episode has a run-time of 24 minutes.

Despite this technicality, we can then say that one volume of the manga was successfully translated into a standard anime season.

What are your favorite manga chapters that have been included in anime episodes?

How Many Manga Chapters are in Anime?