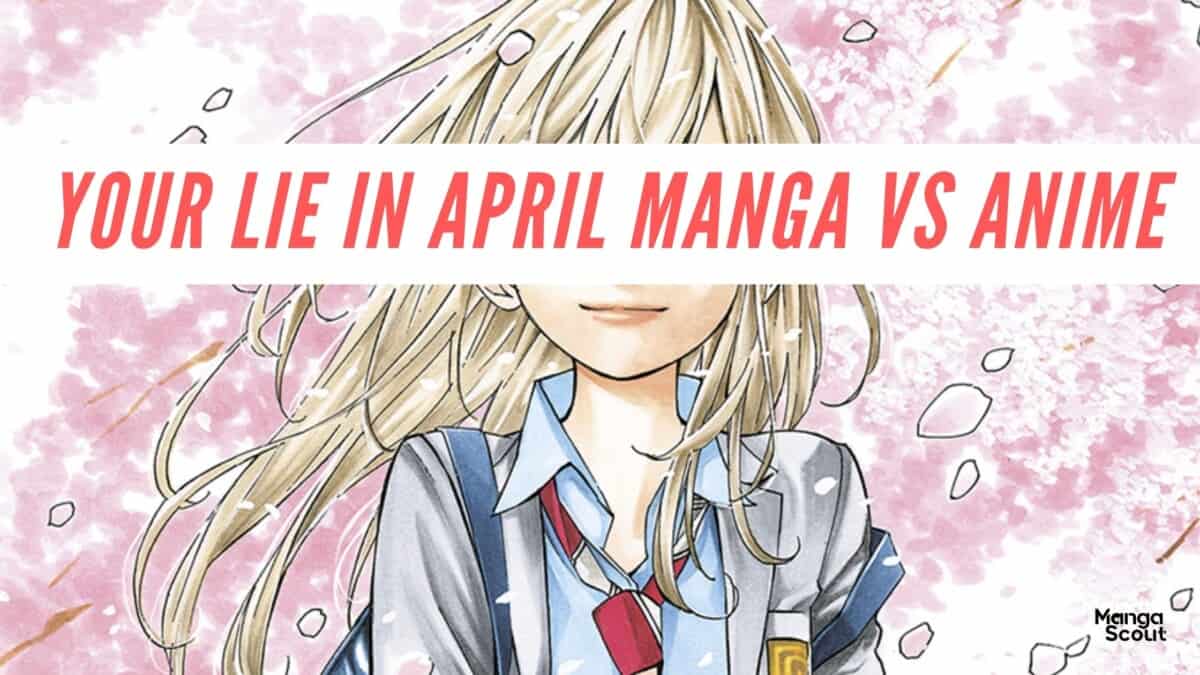 K.D.WilsonManga ExplainedAnime, live-action, manga2 Comments on Your Lie in April (Manga vs. Anime vs. Live-Action)

We frequently encounter famous manga that ends up being adapted into anime. Some are so successful; they are even made into live-action shows or movies. While some adaptations stay faithful to the source material, others make a few changes.

This article will compare the manga, anime, and live-action of Your Lie in April. The source material is the manga, which came out in 2011 and finished in February 2015. The anime adaptation came out in October 2014 and wrapped in March 2015. The live-action was released in September 2016.

Read on to discover how they differ!

Your Lie in April Manga vs. Anime

For the most part, the anime was faithful to the source material. There are no differences to the main plot and no added scenes. However, they cut out some minor scenes.

For example, in the manga, Kaori reads out the blog of an attendee from the gala concert. The anime cut this out, perhaps because it wasn’t significant to the story.

Your Lie in April is a story about a pianist and a violinist. The manga specified the pieces they were playing and the emotions being evoked. However, it’s nothing like the experience of actually hearing the music through the anime.

The anime was able to portray the emotions that were expressed by the performances. They did not need to rely on narration because the anime viewer could hear everything in the music.

The anime adaptation of Your Lie in April is a visual masterpiece. It uses color and brightness to reflect the characters’ journeys.

They begin the show with bright pastels. For example, Kaori is associated with pinks, yellows, and reds. As time went on, the palette became more dull and gray to portray Kaori’s health deterioration. It was to be a foreboding of her death.

Here’s an image comparison of Kaori at the start and end of the series:

This can’t be done through manga since the medium is black and white.

There is also more detail in the art of the anime when compared to the drawings in the manga. Just take a look at this panel:

Here’s an overview of this comparison between the manga and anime:

Your Lie in April Anime vs. Live-Action

This is a difference that you need to keep in mind as we move forward. Most of the creative decisions were anchored on this fact.

The anime shows viewers Kousei’s growth and perseverance through three solo competitions. It also portrayed a part of his life that was not directly attached to Kaori.

In contrast, the movie only showed him joining one solo competition. Although this had no significant bearing on the plot, it did mean that the OST lacked pieces like Chopin’s Etude Op. 5 No. 5.

This is an interesting difference. After all, one of the most heartbreaking things about the anime is that Kaori died at such a young age. Still, it is possible that the director of the live-action decided to do this to make it age-appropriate.

Seventeen-year-olds developing a relationship isn’t a big deal. Meanwhile, people may complain that fourteen is too young.

The anime got away with it because, in animation, age is almost negligible. They’re not “real human beings.” In contrast, live actions have to be more careful about their portrayals.

They were not major side characters in the anime, but Emi, Takeshi, and Nagi were still significant. They added layers to Kousei and Kaori’s individual character development.

However, the live-action focused on the relationship between Kousei and Kaori. Most of their development came from each other. Hence, Emi, Takeshi, and Nagi were no longer needed.

Despite the storyline, the anime still has a lot of comedic moments that stand out. This makes the roller coaster of emotions quite extreme.

In contrast, the live-action took on a more steady approach. It was, after all, classified as a drama. While there were also highs and lows throughout the story, they were not as staggering as those in the anime.

This somber tone also affected how the film was shot and colored. In the anime, there were shifts from bright and colorful to dark and gray. Meanwhile, most of the live-action was deliberately color-graded to appear even throughout.

Take a look at this comparison to better understand what I’m talking about:

The live-action kept the main side characters like Tsubaki and Watari. Still, they faded into the background. Their sole purpose in the story was to push Kousei forward.

In contrast, the anime took the time to flesh out these characters. There, they experienced growth and development on their own accord.

Many anime fans struggled with the fact that Kaori and Kousei never got together. There was awareness of their emotions throughout the series, but they didn’t get to confess to each other.

The live-action addresses this, with Kousei confessing to Kaori before the end of the film.

In the anime, Kaori’s character was developed through Kousei. This is something that she emphasized in her final letter.

This cements the idea that Kousei was someone of value. The growth of Tsubaki and Watari also happened with his influence.

In contrast, the live-action made it appear as if Kaori solely defined Kousei’s character arc. It also didn’t mention his impact on others.

The manga, anime, and live-action had the same basic plot, but the executions differed. For the most part, the anime stayed faithful to the manga. Meanwhile, the live-action changed several details.

Most fans would recommend the anime over the manga and the live-action. While the manga is the source material, the anime was able to add color and music. This makes it more artistic and immersive.

What version of Your Lie in April do you prefer?

Your Lie in April (Manga vs. Anime vs. Live-Action)

2 thoughts on “Your Lie in April (Manga vs. Anime vs. Live-Action)”