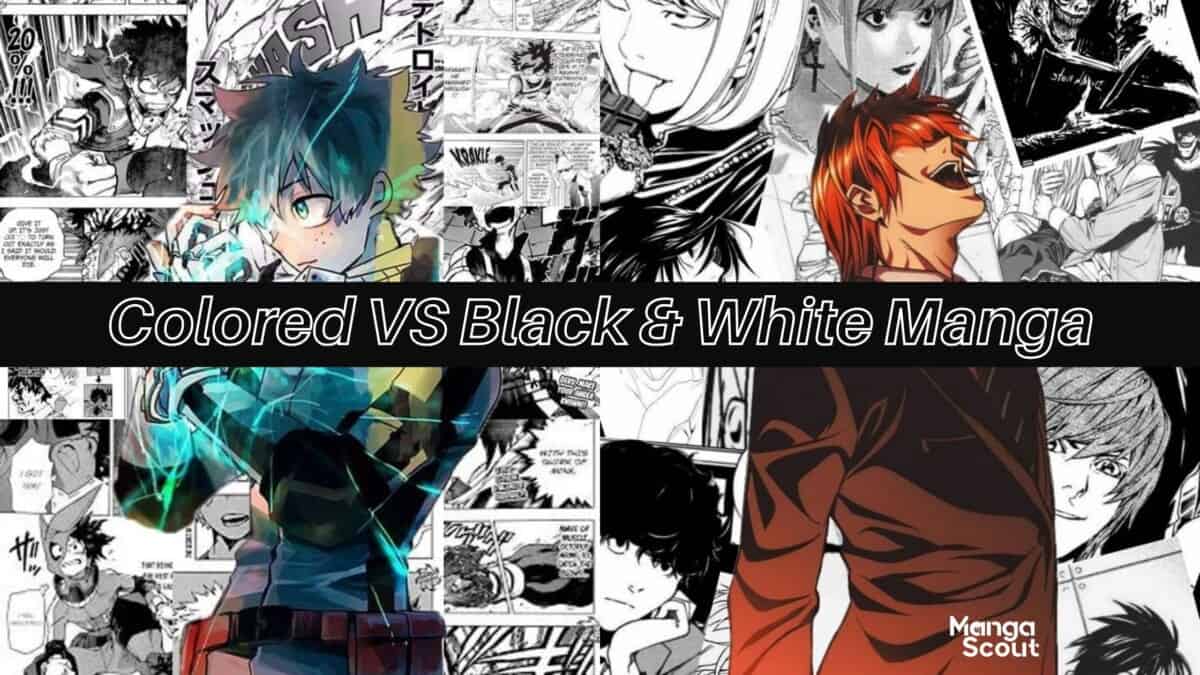 K.D.WilsonManga ExplainedmangaNo Comments on Colored Manga vs Black and White: All the Facts

Some people have complained about why manga only comes in black and white while comics come in color. But did you know that some manga is released in color?

This article will compare colored manga and black and white manga. It will lay out the positives and negatives of both forms. It will also consider why manga artists choose to go with or without color.

Why is Manga Black and White?

Manga is black and white because it’s easier, faster, and cheaper to manufacture. The colored manga would drive the price up and take extra steps for manga artists to produce.

For Japan, the price of manga is low and reasonable. You can grab one manga volume for less than $5 because manga’s printed on recycled paper, and production only requires one kind of ink.

One of the reasons why manga sales are very high in Japan. People of all financial situations can have access to it at a past time. Hence, if manga becomes distributed in color, costs will surely rise. If so, then an entire group of people will no longer be able to purchase it.

Manga is black and white because of tradition.

As we all know, Japan is a country that highly values its history and local practices. Now, manga has been around since the 19th century. At the time, it was painted using black ink and a brush.

Today, mangakas have transitioned to pens and digital mediums. Nonetheless, the tradition of creating manga in black and white remains.

Manga is black and white to maximize efficiency.

Manga artists have to draw 20 pages of panels every week. Just doing it in black and white already takes up all of their time. If they add color to it, they will no longer be able to reach their deadlines.

Manga artists already struggle with deadlines. This is regardless if they already have assistants. Assistants may help with the filling, detailing, shading, and toning. But the workload is still overwhelming. Eiichiro Oda and his infamous schedule is an excellent example of this.

Now, you may argue that manga artists can hire more assistants. However, this would mean more money than they have to spend personally. Remember: production companies don’t pay for manga assistants.

Manga developed its style because it’s in black and white

Everyone loves the distinct style of manga. However, it can be argued that this was only created because of the limitations of black and white.

Manga artists had to amplify their creativity by using line thickness and shadows. They had to be creative to make their drawings stand out. They also had to resort to background graphics and filters to frame the scenes better.

Exaggerated graphics and features are also used. For example, flowers and bubbles are commonly placed to portray lightheartedness. They are employed to convey the emotions and details of a particular scene properly.

Do Manga Come in Color?

Yes, some manga does come in color. Popular manga like Dragon Ball and Attack on Titan comes in color. Also, manga released digitally is primarily released with color. This is because there is no need to spend more on the production of physical copies.

There is also the factor of competition. A lot of reading materials are published online. As such, digital manga artists have to produce

What Do You Call Manga in Color?

You call manga in color LINE Manga, Manhwa, Manhua, and Webtoons. These are manga that has the same sentiment as the traditional manga but are primarily published digitally.

Let break down each version for you.

Many readers may be familiar with Line webtoon, but what is Line manga? Line manga is an app that is exclusive to Japan. It is like your typical manga reader, except it hosts several exclusive titles.

Another thing that makes it unique is that it flows similar to manhwa or webtoons. Readers scroll instead of flip, and some manga also has embedded sound effects.

A lot of manga from Line manga are still released in black and white. However, it is important to note that most of the series in Line manga are drawn digitally. Because of this, more manga artists have the liberty to release the manga in color.

Manhwa is basically manga that originates from Korea. They are released in Korean, but fans have gone on to release English translations.

Unlike Japanese manga, manhwa is released in color. It is read from left to right and is designed for continuous scrolling. Digital manga apps have you flipping pages. Meanwhile, digital manhwa apps have you scrolling down.

This means that panels and images are longer than manga panels.

The plot devices between manga and manhwa also differ. Manga is usually centered on an ensemble cast. Meanwhile, manhwa usually focuses on the main character and her love interests.

Here’s a panel from True Beauty, a well-known manhwa:

Webtoons were originally synonymous with manhwa. But as they reached more parts of the world, they also evolved into something more. Unlike manga, which is generally confined to Japan, webtoons can come from any country.

To understand this better, you can think of it this way. Most manhwa is webtoons, but not all webtoons are manhwa.

Webtoons are mostly written in English because of the global audience. Some are written in different languages, depending on where the author is from. But they are eventually translated into English as well.

Some webtoons also use background music for important scenes. As you scroll through these panels, embedded music would play for added effect.

Here’s a panel from Let’s Play. It’s written by Leanne Krecic, an artist from America:

Manhua is the Chinese version of manga. They come from the nations of China, Taiwan, and Hong Kong.

Etymologically speaking, the word “manga” actually came from “manhua.” Like manga, manhua is read from right to left. Many manhuas are also still released via print. However, many manhua artists have made the switch to digital as well.

Manhua is released in either black and white or color. However, it doesn’t follow the typical manga art. Some panels of manhua have been rendered as a painting. This is different from manga, as its panels are considered drawings.

This is a panel from Martial Universe, a famous manhua:

Is Colored Manga Better than Black and White Manga?

But this depends on your preferences.

For instance, black and white manga has the original manga style that we all know and love. Because of this, it can convey emotion uniquely. It is nostalgic, and it speaks to tradition.

Colored manga can portray art differently. It captures settings in spring and autumn in a vibrant way. Some people also think it’s more appealing to the eyes.

I like switching up black and white manga and colored manga. They both provide a unique experience. They also portray stories differently. It’s a matter of what you want to read at the moment.

Manga is traditionally released in black and white. However, the transition to digital mediums has also seen the rise of colored manga.

Strictly speaking, they are not comparable. In a sense, they are different art forms. However, both capture the essence and excellence of graphic storytelling.

Do you prefer black and white manga or colored manga?

Colored Manga vs Black and White: All the Facts