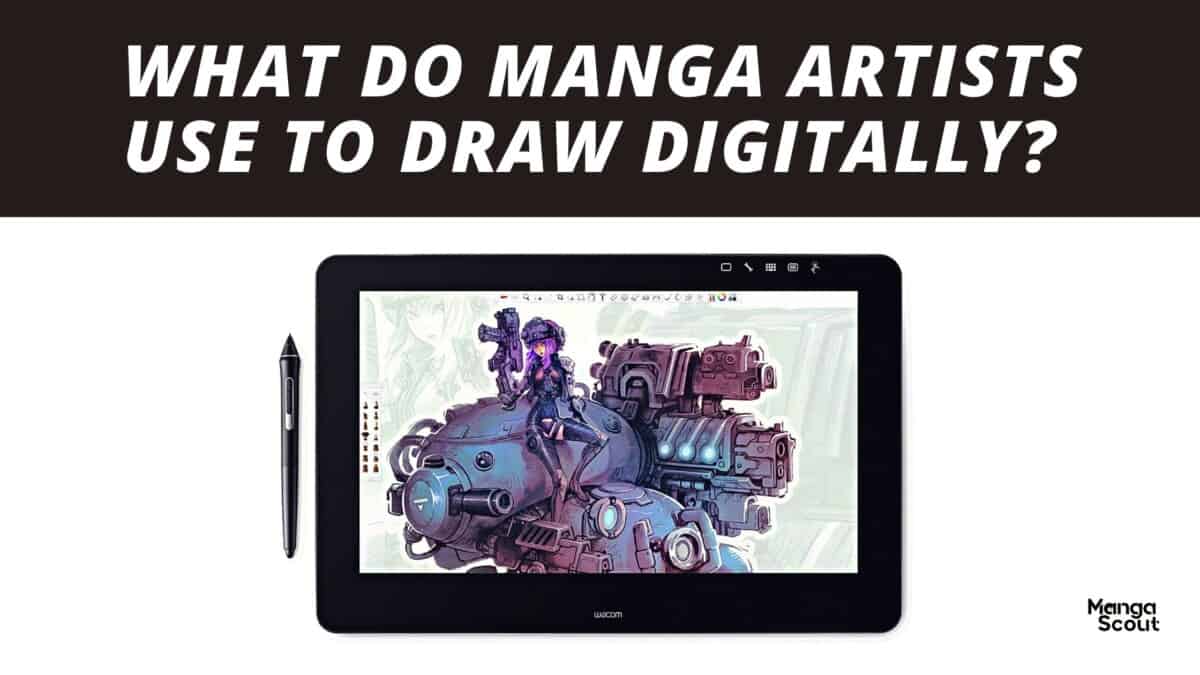 For a long time, manga artists have preferred using pen and paper to create their work. However, recent years have seen many of them transition to the digital age. Have you ever wondered what they use?

What do manga artists use to draw digitally? Manga artists use Clip Studio Paint for drawing, paneling, and layering their drawings and Photoshop, PaintTool SAI, and Corel Painter for editing, cleaning, coloring, and formatting. Manga artists access this software using a drawing tablet.

Why did they choose these particular tools, and how do they work?

What Tablet Do Manga Artists Use to Draw?

Most manga artists draw digitally using a Wacom drawing tablet. The brand has almost become synonymous with manga art. Their YouTube and website offer many resources for how to draw manga using their tablet.

They also have software integration specifically used for manga creation

To be more specific, the Wacom Cintiq 21UX is the most popular choice among manga artists. Ishida Sui, the mangaka of Tokyo Ghoul, has spoken well of this particular tablet. Yoshikazu Hamada, the mangaka of Tsugumomo, is also a loyal user.

Now that it’s an old model, we recommend a newer model right here.

It has a 21.3″ screen, which allows the manga artist to see the drawings clearly. The fact that it was released in 2010 is also a testament to its longevity. As manga artists are still using it today, that means that the tablet has held up for over 10 years.

Younger manga artists have since opted for the newer Cintiq Pro. Its models come in different sizes: 16″, 24″, and 32″.

Yoshitoshi Abe, the mangaka of Haibanme Rei, uses the Wacom Cintiq Pro 24“. It has a large etched glass screen that is anti-glare and has 4k quality. Meanwhile, the colors have 99% Adobe RGB coverage. This means that it produces accurate and vibrant colors.

It was also created to be compatible with the Flex Arm. This is a Wacom stand that only the 24″ and 32″ tablets of Wacom Cintiq Pro can be mounted on. It basically tilts the tablet into any angle that would be most comfortable for the user.

These, plus the fact that it has virtually no lag, make it great for a professional manga artist.

What Digital Pen Do Manga Artists Use?

Manga artists mostly use a digital pen with over 2,000 levels of pressure sensitivity to ensure you have ultimate control over each stroke. Just Like the Wacom Pro Pen 2. This is because it works with almost all Wacom tablets. But if you were to get any tablet the pen it comes with normally fits these standards.

But the Wacom pen has 8,192 levels of pressure sensitivity and tilt support. This means that you can easily change your brush size and stroke. It just depends on how you hold the brush and draw on the screen. This makes it great for shading, shadowing, and masking.

Novice manga artists who made the investment even say that it may be the best digital pen on the market. Tenjin Hidetaka, a mecha manga artist, uses it for all his digital drawings. It produces consistent strokes and has a well-balanced pressure curve. It also works very smoothly, without any lag.

What Brush Do Manga Artists use to Draw Digitally?

Manga artists use Clip Studio Paint as their main drawing software. It is basically the updated version of Manga Studio. With this, we know that its foundations are based on manga drawing. Hence, it is unsurprising that its digital brushes are perfect for manga artists.

Manga artists usually use thin brushes to create their drawing outlines and frames. Then they use a layering brush to add detail to the characters. If a manga artist is going for a soft look, the airbrush settings are also utilized.

Pencil brushes are then used depending on the art style of the manga artist. You can refer to this image below:

The brushes in the last row are used to add depth and drama to a drawing. Meanwhile, the two upper rows are the brushes used for detailing and drawing itself.

Manga artists also use dry brushes for line effects and background scenes. This helps get an authentic charcoal feel, which is no small feat. It is difficult to achieve using regular digital brushes.

They also use the side pencil brush to make their drawings look a little rough. You can refer to this sample image below for how it works:

What Software Do Manga Artists Use to Draw Digitally?

Its settings are able to produce a traditional look and a natural feel. It has many brushes that make realistic pen-like strokes by detecting pen pressure. It also has other features necessary for manga artists, such as:

To manage the text, Clip Studio Paint also has letter-character brushes. It can even resize and edit the line thickness of vector lines, depending on the manga artist’s desired look.

It can basically do everything, from planning to drawing to lettering. It is unsurprising that Shun Saeki, the mangaka of Shokugeki no Souma, swears by this software.

Every artist uses Photoshop, and manga artists are not excluded from this. On the one hand, it has fewer manga features than Clip Studio Paint. On the other hand, it is easy to use, has customizable options, and has a wide variety of features.

It is particularly used for editing, as it has techniques such as spot healing, dodge, and burn. Its intelligent stroke-smoothing modes are also used to clean up a drawing. Manga artists also use it to alter the shadow, contrast, and exposure of their panels. Some even use the warm tint to get the brown appearance of a printed manga book.

Hiroya Oku, the mangaka of Gantz, specifically uses it to clean lines, add tones, and fix the contrast.

PaintTool SAI is nearly as beloved as Clip Studio Paint among manga artists. It is mostly used for locking layers and adding color, especially to manga chapter covers. It has a broad color spectrum and can be used to adjust vibrance, saturation, and luminescence. Ishida Sui has spoken about how he enjoys using it for his colored illustrations, as it is easy to use.

Corel Painter has a variety of brushes. This ranges from digital-looking brushes to pencil-like brushes. This means that manga artists can use it to create immersive digital manga. But if they prefer, they can also create a classic-characteristic manga.

Manga artists also use Corel Painter brushes to add texture to their drawings. Some of these brushes include watercolor and chalk.

The software also has the option to change the texture of the paper. Hence, you can adjust the roughness and smoothness of the base as you wish. Texture options include grunge paper, woven paper, and organic paper.

These can help in giving the manga a more authentic paper look. They also allow experimentation with complementary brushes and paper textures.

Which tools and software are you most interested in?

What Do Manga Artists Use to Draw Digitally?