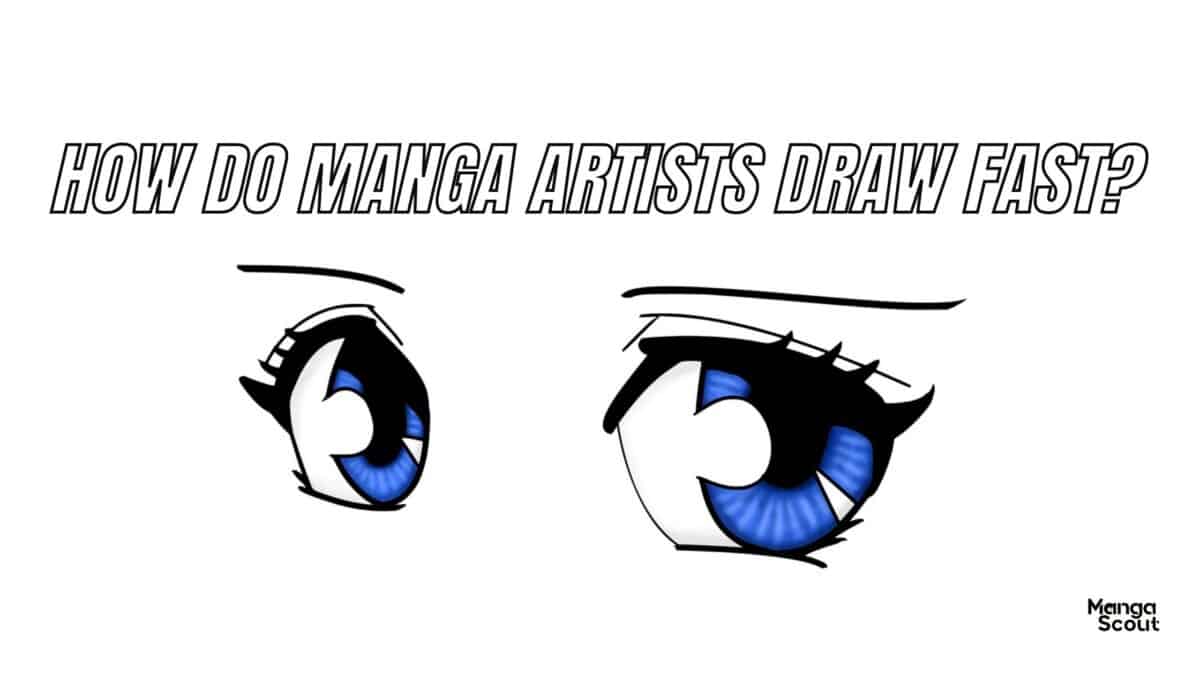 K.D.WilsonUncategorizedmanga artistNo Comments on How are Manga Artists Drawing So Fast? (10 ways)

Did you know manga artists have to churn out 20 pages of content every week?

It may not seem like much at a glance, but that’s a lot. This includes drafting, inking, toning, creating backgrounds, and publishing. As such, they had to make sure that they drew their panels fast.

This article will look at ten reasons why and how manga artists draw fast. You may think that it simply has to do with how skilled they are. However, there is much more to it than that.

1.) Manga Artists Have Decades of Practice

It takes a long time to become a mangaka. Many manga artists have been drawing since they were in grade school. They honed their skills through many years of practice. A number of them even took the time to take art courses in college.

It wasn’t just that they took the time to practice drawing one hour a day. In fact, most of them drew for at least five hours every day. Naturally, the more that they drew, the better and faster they got at doing it.

It’s not 1995 anymore and this comes with some benefits.

Manga artists who draw digitally are twice as fast as those who draw traditionally. They normally use drawing tablets.

Hiro Mashima, the mangaka of Fairytail, has been an artist for over 20 years. For much of his career, he used traditional techniques. Then he made the switch to drawing digitally. In an interview, he confessed that drawing digitally cuts the time he draws by half.

So, for example, if it normally takes him four hours to finish a page, it now only takes him two hours. We can expect that other manga artists who draw digitally also have the same time frame.

It doesn’t matter if you’re drawing traditionally or digitally. Either way, the quality of your materials matters. And as professionals, mangakas use the best that they can afford to make their process easier.

For example, if you’re using traditional methods, the barrel size of your pen will affect the speed of your work. If you’re not comfortable with your pen, you will draw slower. And if you’re using a pencil, having graphite that tends to smudge easily will dirty your work. This means that you have to pause to ensure that the page stays clean.

If you’re drawing digitally, the speedy response of your tablet will matter. The last thing you want is to experience delays and lags with your programs.

4.) Manga Artists Have Mastered Their Characters

Manga artists draw fast – especially when they’re doing their own work. For example, Tite Kubo has drawn Bleach for 15 years. As such, he can sketch his characters in less than ten minutes.

Imagine drawing the same character for that long, the muscle memory alone would speed you up.

Here is an example of a drawing that he did live:

Manga artists will understandably take longer to draw a character that is not theirs. However, their speed of drawing would still be faster than if you or I made the attempt.

This is because manga artists know the foundations of drawing. They have mastered human anatomy, framing, and perspectives. As such, they don’t have to double-check and make sure that the hands they’re drawing look just right. They also don’t have to repeatedly erase and redraw a scene to get the right proportions.

In this sense, manga artists are confident in their skills. They know what they’re doing. This makes the drawing process faster and easier.

The truth is that individual manga artists can only do so much. As such, many of them employ manga assistants who deal with the backgrounds, shading, and toning. In this sense, manga artists are able to draw faster because they have help. They only need to draw the characters or the foundational elements. Their assistants will then fill in everything else.

Manga artists draw fast because they use shapes to structure their drawings. After they have set this pillar, they begin to make changes and add details. This helps ensure the proportion and accuracy of their drawings, without sacrificing speed.

Consider this image so that you can understand the process better:

Drawing for a long time can make your fingers and arm ache. In fact, at a certain point, your back and legs will also begin to experience numbness. Why? Because your body has yet to adjust to the toil involved in drawing.

This is why beginner artists take a lot of breaks when they draw. They need to stretch their fingers and body constantly. They need to rest before they continue with their work. As such, it also takes them longer to complete a drawing.

In contrast, professional manga artists can draw for long periods of time without a break. In fact, mangakas like Eiichiro Oda are famous for drawing for eight hours straight. Hence, they are also able to finish their drawings faster.

It’s not manga artists don’t need a break; it’s that they don’t want to take a break. Now, I’m not saying that this is healthy. However, it is a fact that they are known for their extreme work ethic.

When manga artists begin to draw, they put their entire focus into it. This is why many mangakas end up missing meals. Once they start on something, they won’t stop until they’re done with it.

They’re also not the type to converse with others while drawing. They don’t watch TV or check their phones. Instead, they get rid of distractions. They place themselves in a room where they only give attention to their work. Naturally, this single-mindedness and the lack of distraction make them finish drawings faster.

10.) Manga Artists Have to Meet Deadlines

Professional manga artists are expected to churn out a set number of pages every week. This means that they cannot dilly-dally and that they cannot work slowly. They have no other choice but to draw fast.

In contrast, if you’re just drawing as a hobbyist or an aspiring mangaka, you can take things at your own pace. You can set deadlines for yourself, but they are largely flexible. If you’re not able to meet your personal deadlines, there are no consequences.

Meanwhile, mangaka artists who are not able to finish their work on time will get in trouble. They have contracts to fulfill with their editors and publishers. This pressure then drives them to finish their drawings faster.

There are many different reasons why manga artists draw fast. But it’s important to remember that at the end of the day, nothing beats practice. There are no shortcuts. And so, if you’re trying to draw faster, make sure that you have your drawing foundations in check.

Once you have mastered these techniques, you can begin to employ other methods. If you can afford it, you can even invest in drawing tablets and assistants.

How are Manga Artists Drawing So Fast? (10 ways)