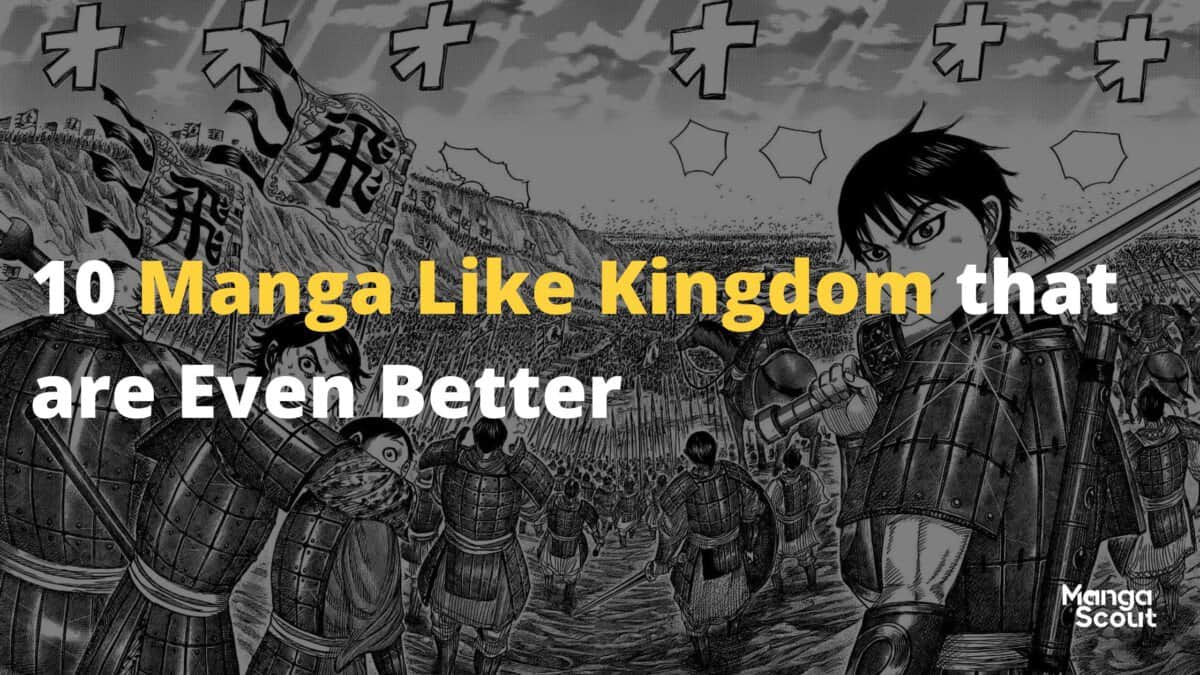 K.D.WilsonManga ExplainedNo Comments on 10 Manga Like Kingdom that are Even Better

Kingdom is a famous manga series that is still running to this day. It was serialized in January 2006, and it has been released via 65 tankobons thus far. Although the story is in Japanese, it follows a tale that is based in China.

In this article, we will list the 10 manga that is similar to Kingdom. These similarities are anchored on different things, including settings, characterizations, and overall plot. Accordingly, key differences must also be considered.

Nonetheless, if you’re a Kingdom fan, then be excited.

You can rediscover the magic of Kingdom by adding the following manga to your reading list!

Vinland Saga is a manga that was first released in 2005. Like Kingdom, it is still ongoing to this day.

The story of Vinland Saga is based in 11th century England. Thorfinn, the main character, is driven by revenge as he seeks out his father’s killer, Askeladd. Yet in twits of events, Thorfinn ends up working on Askeladd’s ship as part of the crew.

Thorfinn slowly makes his way up the ranks as he hones his skills. This is all in a bid to earn an honorable duel with Askeladd and avenge his father.

Now, Thorfinn is vastly different as a character from Shin, the main character of Kingdom. However, both of them are initially driven by revenge as they figure out life in their teens. They also find themselves in fairly similar settings and circumstances,

Ultimately, you can find an equal amount of drama, action, and gore from both mangas.

Berserk is a manga set in medieval Europe. It follows the story of Guts, a lone warrior who is out for revenge, not much unlike Shin. Guts trust someone he shouldn’t have had and has now been marked for death. To survive, he has to fight and kill – without losing too much of his humanity in the process.

Berserk and Kingdom are both set in countries that are in a constant state of war. Hence, there are themes of vengeance, determination, and violence. Still, Kingdom’s warfare is considerably more detailed and intense.

Nonetheless, both of these mangas have really great art so the action scenes are worth looking at.

3.) The Heroic Legend of Arslan

The Heroic Legend of Arslan is a classic manga that ran from 1986 to 2017. That’s almost two decades, and it speaks of how wondrous the story is. It is set in Pars, a place reminiscent of Ancient Persia, where magic exists.

The plot follows Arslan, the prince of Pars. He is now burdened with the task of saving his nation after it has fallen siege to a neighboring nation. He is aided by extraordinary allies with exemplary skills. Together, they work on building an army to defeat the soldiers of the warring country.

Like Kingdom, the Heroic Legend of Arslan features a prince. He becomes involved in a struggle to liberate the land and prove his worth. He then becomes king of a kingdom that is falling apart and navigates its establishment.

Both mangas include themes of politics, battle strategy, and war.

Now, Historie and Kingdom were set in different kingdoms, China and Macedonia. However, both were considered monumental in the ancient world. Further, both manga feature stories of low-ranking slaves who rise the ranks. These men eventually became great leaders. Still, they remained loyal to someone above them in the hierarchy.

Both stories contain a lot of gore and action. But Kingdom contains more of that than Historie and it also has more detailed art. One great thing about these historical stories is that they took artistic liberties. However, they still maintained authenticity and a degree of accuracy.

Soten Kouro is a long-running seinen manga that was published from 1994 to 2005. It has 36 volumes in total and the story was also released in an anime adaptation.

Like Kingdom, Soten Kouro was based on the novel, Romance of Three Kingdoms. Accordingly, both manga is based in ancient China during the warring kingdoms period. The plot involves war, conquest, military strategy, and hopes for unification.

Although both stories are classified as seinen, Soten Kouru is considerably more serious. It also contains more mature themes.

Gunka no Baltzar, like many others on this list, is a seinen manga. It follows the story of Bernd Baltzar, a military officer in a militaristic country in Europe.

One day, he is suddenly reassigned as a military adviser and instructor. He was moved to the Royal Military Academy of a neighboring allied country. There, the students are untrained and there is little military power. Further, the civilians are against firearms.

He then finds himself with the burden of enforcing military reform. This is while he deals with political intrigue and conflict.

Like Kingdom, Gunka no Baltzar tells a war story with a complex set of characters. The protagonists are brilliant tacticians. They are great at both military skills and political strategy. Yet to their core, the stories follow men who are fighting for something they believed in.

Angolmois: Record of Mongol Invasion is set in the 1200s. It tells the story of a group of prisoners who were previously exiled to Tsukishima Island. They ended up building the first line of defense against the First Mongol Invasion of Japan.

At the centerpiece of the cast is Kuchii Jinzaburou. He is a swordsman and former trainer of the Kamakura Shogunate. He has samurai experience, great swordsmanship skills, and amazing leadership. He can think up his own strategies and tricks and is the perfect mix of brains and brawn.

Like Kingdom, Angolmois covers ancient war and political strategy. They both show the character’s need to survive in difficult situations. Both are also full of bloodshed and can be brutal, as the art is detailed.

Schools then disciple students to be great at military combat and strategy. They were trained to defend towns and villages and take command of operations.

The main protagonist is Kakuri, considered one of the greatest disciples in school. He is tasked to organize defense for the cities and must build a team in order to do so. The manga follows his adventure.

The focus of both manga is war and strategy, with an underlying highlight on a one-man army. Both characters in these different mangas face complicated situations. These led to unexpected resolutions.

Although Bokko is shorter than Kingdom, there are identical narratives within the stories.

Ad Astra: Scipio to Hannibal tells the tale of Scipio and Hannibal. They are considered two of the greatest military commanders in history. Although a work of fiction, the narrative is based on true historic events.

The manga follows their life history, from infanthood to battlefield greatness. The main story is set around the Second Punic War. Scipio and Hannibal were the two sides of the battle. Readers are then shown how their struggles shaped history.

Both Kingdom and Ad Astra have epic fights and warfare, with great tactics leading to victory. They show the struggles of maintaining an empire. They also touch on what royalty means with the dictatorship of some leaders.

Sangokushi is another manga based on the Romance of Three Kingdoms. It’s a few decades old, as it was originally published from 1971 to 1987. Still, it houses a classic and timeless story.

Liu Bei, the main character, was introduced like Shin was in Kingdom. He is a poor man who weaves mats for a living, though he is shown to be smart and principled. Eventually, it turns out that he is possibly in line for the throne. The manga follows how he reforms the land.

Like Kingdom, the manga touches on the importance of honor and glory in wars. The main characters are likewise virtuous and kind and truly care for the people. Still, there is intrigue, politics, and bloodbath from battle.

What is your favorite manga that is similar to Kingdom?