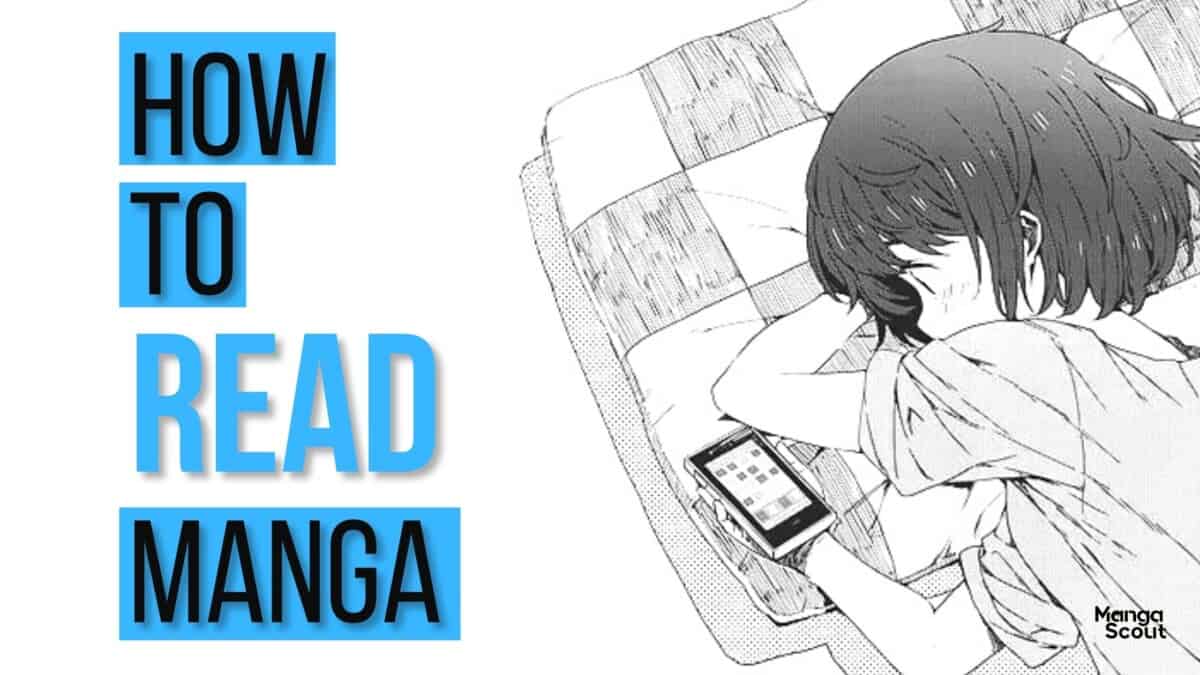 K.D.WilsonManga Explainedmanga, read2 Comments on How to Read Manga: The Complete Guide

Do you want to get into manga but don’t know where to begin? Does the format of manga confuse you? Don’t worry; we’re here to help.

How to read manga? Manga is read from right to left. Panels are read from the upper right panel, then read moving left. Follow this pattern from top to bottom until you finish and repeat.

Still, there are variations to this, depending on the panel layout, the bubble order, and the manga type.

To better understand how it all works, read on!

How do you Begin Reading Manga?

If you have the physical copy of a manga, begin by laying it on its left side. What we usually refer to as the back cover in English books is the front cover of a manga.

When you get to the panels, begin by reading them from the upper right panel. Keep going left until you get to the border of that row. When you move to the next row, begin from the right again.

Here’s an image to help you understand better:

A more complex one:

As you can see, the number of panels doesn’t change the way you read it.

Although it may seem complicated at first, you’ll eventually get the hang of it. It’s similar to reading a comic book, except done in the opposite direction.

You may encounter that panels are arranged vertically or if you have panels that take up the entire row. If so, then just read from top to bottom.

How Do you Read Manga Symbols?

Manga is visual art. It means that every element in a panel, text, drawing, symbol, or otherwise has a meaning and a purpose. To see how it works, consider this page from Jujutsu Kaisen:

Iconographic conventions in manga are also referred to as manpu. This directly translates to manga symbols. They are used to express either movement or emotion. It depends on the context and how the manga artist used them.

Some stock symbols are used to convey sadness. Others communicate happiness, anger, or embarrassment.

So that you can get an idea of the symbols that I’m talking about, you may refer to this image:

Manga artists are able to show the movement of their characters through speed lines. These are frequently used in action frames. The way they are used varies, depending on the storyline.

To see this in action, look at this panel from Pokemon. It shows how straight speed lines are used to convey running:

This panel from Haikyuu uses speed lines differently. Here, they are meant to give swift blocking and movement:

Lastly, in this panel from Over Rev!, the manga artist used speed lines to show a car chase:

The Japanese language has an immense number of onomatopoeic words. These are words used to represent the different sounds. For example, in English, we have onomatopoeic words like “woof,” “meow,” “sigh,” and “yawn.”

In Japanese, these words are called gitaigo. We can think of them as sound effects used in manga. They aren’t necessarily symbols, but they are utilized as such.

For example, if you see ぐるぐる around a manga character, it means that he is dizzy. Meanwhile, ガガガ means that something around him is rumbling.

You can refer to this table for more gitaigo:

As it is in any visual art, symbolism is frequently used in manga. One of the most commonly used symbols is cherry blossom petals. It is most commonly used in shoujo or shounen manga, as they pertain to spring or youthfulness. When you see them in the scene, it means that it’s a heart-warming moment.

An opposing symbol of this is a glass dropping and breaking. This is usually ominous and is meant to show that something terrible will happen soon.

How do you Interpret Speech Bubbles in Manga?

The shapes of speech bubbles in manga differ in style and pattern. This is to convey the mood and emotion of the character speaking or thinking. They are known as fukidashi in Japanese.

Well-rounded and smooth speech bubbles are usually used for regular text. This means that the text is neutral. In other words, there is no significant emotion conveyed in the dialogue.

When tiny lines break up around a speech bubble, it is meant to convey a whisper. When small circles link the speech bubble to the character, it becomes a thought bubble.

Here are a few other examples of different speech bubbles:

How do you Read a Manga Character’s Design?

Manga and American comics have many stylistic differences. Because of this, some facial expressions can be confusing at first.

Manga artists usually depend on the eyes to convey the emotions of their characters. The death-glare, the widened-eyes, and the heart-eyes are all pretty easy to interpret.

Some other variations include:

In manga, bigger eyes usually mean innocence, beauty, and cuteness. In contrast, narrow and thin eyes are intended to convey coldness or evil.

It isn’t about the way a nose was drawn. Instead, it’s about what comes out of the nose.

Examples: When a bubble is forming out of a manga character’s nose, it means that he is bored, sleepy, or already asleep.

When a character suddenly gets a spurting nosebleed, it means that he is sexually aroused. This is usually used as a comedic effect.

If a manga character has light strokes on her cheeks, it usually conveys a happy kind of blushing. In comparison, blush strokes that spread beyond a character’s cheeks represent embarrassment.

To understand the differences better, look at these two panels from Kaichou wa Maid Sama:

Meanwhile, scribbles across and beyond the cheeks are used to convey injury. You can see this in this panel from My Hero Academia:

What element is most confusing to you when you read manga?

How to Read Manga: The Complete Guide

2 thoughts on “How to Read Manga: The Complete Guide”