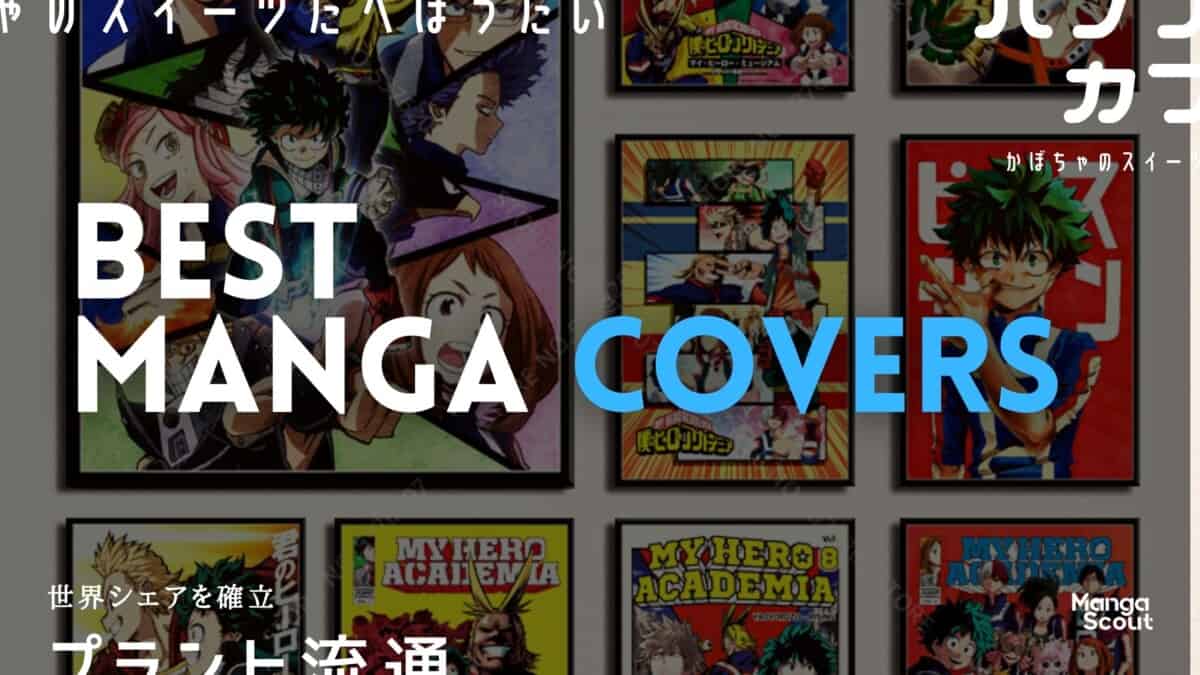 Manga covers serve as the face of the manga. A good cover presents more than a good art style. It also taps into emotions like curiosity, nostalgia, and others. It’s also the number one selling tool that a mangaka control.

Here is our list of the 20 best manga covers ranging from iconic to artistic, starting from least to best.

Posuka Demizu breathed life into the world of Kaiu Shirai. The covers of The Promised Neverland showcased intricate artworks in vibrant, dancing colors. But it is Volume 14 that stood out from the rest.

It didn’t have a lot of centerpiece elements nor background objects that distract the reader. But the artist made good use of her talent in perspective drawing.

As per the subject, Hellsing Volume 4 featured nothing unique. Kohta Hirano chose to illustrate Alucard front and center, brandishing his pistols. He seemed to be in the middle of turning into a cloud of bats. It’s the classic illustration of Hellsing’s iconic vampire.

The cover is a marriage of the Slavic myths and the manga monster. By using plain colors, he elevated the simple concept into something more sophisticated.

Yusuke Murata created his take of the superhero genre with One Punch Man. Volume 1 cover reminds us of Marvel and DC comic covers of flexing superheroes. The illustration conveys effectively the personality of the main character.

Peep the bag of Japanese vegetables in the bottom right corner. At the same time, the colors chosen for the cover are muted and tame like Saitama himself.

Takehiko Inoue’s Slam Dunk is everything a sports manga can aspire to be. It also features covers that seize attention.

Volume 21, in particular, gives an intense rendition of Hanamichi Sakuragi. The dark background creates a striking contrast with the bold reds and oranges. It looks more like a book of paintings than an actual manga. Yet It somehow sets the tone of the volume.

As far as manga covers go, Mochizuki Jun’s concepts had been consistent. She did the typical character portrait.

But Volume 18 is memorable. It is the first attempt at a full perspective portrait.
It featured Levi of the Baskerville clan, capturing the nuances of his character. The bright purple creates the image of the abyss swallowing him. It contrasts well with his washed-out coloring.

With Volume 29 featuring a mirror of the iconic scene from the first volume, he created a sense of change. Bakugo is his teenage self wearing his hero costume. His hand reached out, ready to accept Deku’s help.

Ohkubo Atsushi already had an iconic, almost 3D quality shading. But by Volume 16, his style switched to a flatter quality with rich, vibrant shadows.

The change suited volume 19, the first volume that did not have a plain white background.

The cover art has this crazed, mad aura representing the madness consuming Death the Kid. The color choice respected his color scheme, which is a nice easter egg.

It is hard to choose among MHA’s covers. But with the central theme of Tomura Shigaraki’s insanity, Volume 25 also made best 12.

The colors blend well. The purples, blacks, and whites offset each other, crackling with dark energy. Shigaraki laughed at the center. The strokes come alive, giving off a certain level of insanity.

As a sports manga, Haikyuu!! has plenty of intense covers. But it is not the intense ones that grab the attention rather it is the ones that give off a certain type of feeling.

Volume 42 features Hinata Shoyo staring at something with extreme focus. His gaze is the only thing that’s intense about this cover. Both colors and lines are tranquil, but the whole image psyches you up.

Kishimoto Masashi has always given us action-packed covers. Volume 45 distinguished itself with the color scheme that made the elements of the cover pop.

Unlike typical cover arts, he made heavy shadows on Naruto. This created a great contrast with the bright colors for the antagonists. The Finnegan served as the hook at the center of the cover.

Attack on Titan wields both action and concept with its covers.

It makes the readers look forward to the following pages of the manga. But Volume 22 deviated from its predecessors by evoking a tranquil and calm feeling. It has the message calm before the storm written all over it.

Slam Dunk’s Volume 27 exemplified the use of color contrast to elevate minimalism. Indeed, Takehiko Inoue made a smart choice with the two contrasting colors in the art. It’s easy on the eyes. At the same time, it draws our attention to the numbers on the backs of the characters and the title.

It’s bizarre enough to present the rival of the protagonist team in such a calm and tranquil moment.

The theme of the manga revolves around dystopia and psychological horror. Akira’s covers do a great job illustrating that.
This is what makes volume 4 iconic.

Katsuhiro Otome presented us with a somewhat peaceful and clean surine like image.

Akita sits on a damaged throne in the middle of the ruins. He’s dressed as an emperor. The red of his cape has a striking quality to it. It both reminds you of royalty and blood. It’s eye-catching, and it makes the other details of the cover fade.

Yet another work by Takehiko Inoue, it comes as no surprise that Vagabond would make the top 20.

Vagabond’s cover arts have always exemplified simplicity is beauty. Takehiko-sensei highlights the characters on the cover with detailed illustrations. His superb line work is not drowned with too much color.
Volume 37 shows a lovely illustration of Musashi Miyamoto. It’s created using plain black brush strokes. A blue background surrounds him. It creates the image of Miyamoto looking up at the sky.

Unlike others on this list, his covers are just as good as his panels.

Requiem of the Rose King is a historical fiction by Aya Kanno based on William Shakespeare’s Richard III. For the first covers, she experimented with black and white character portraits. They are already beautiful with the gracefulness of Aya Kanno’s line work. But they also looked too much like any other manga.

Come Volume 4, she incorporated vibrant colors. It is somewhat reminiscent of the art nouveau style. Edward of York looked both sensual and washed out on the cover. It evokes a sense of foreboding.

Sui Ishida experimented with watercolor elements for his covers. Volume 14 is the apex of all Tokyo Ghoul cover arts. We have the white and black illustration of Kaneki Ken, who seemed to be staring right at you. The color choice is brilliant. The brush strokes are also dramatic.

Takeshi Obata’s art has this iconic level of detail. He makes live textures appear with his lines and shadows. With the quality of a carved marble statue that seemed to belong in a museum, Volume 12 made it into the best 20.

There is also the very present religious overtone. Light is at the center, acting as a messiah. This is very relevant to the writing of the manga. The cover rates are high in all departments- concept, art style, and color choice.

Sakamoto Shinichi recreated the horror of the French Revolution with his two mangas. They are Innocent and Innocent Rouge. He brought historical figures like Marie Antoinette to life with his intricate artwork.
His cover arts are also a treat to see. Volume 12 brought a satisfying conclusion to the whole series.

The cover is an etch-style illustration of Marie Josephe Sanson in red. It played with the word, rouge in Innocent Rouge. He presented a saint-like rendition of the character a sinister red hue.

That concludes the list. My favorite is defiantly Akira.

Did I miss any covers?

What are your favorite manga cover?

Whatever your answer is let’s hear it in the comments below.