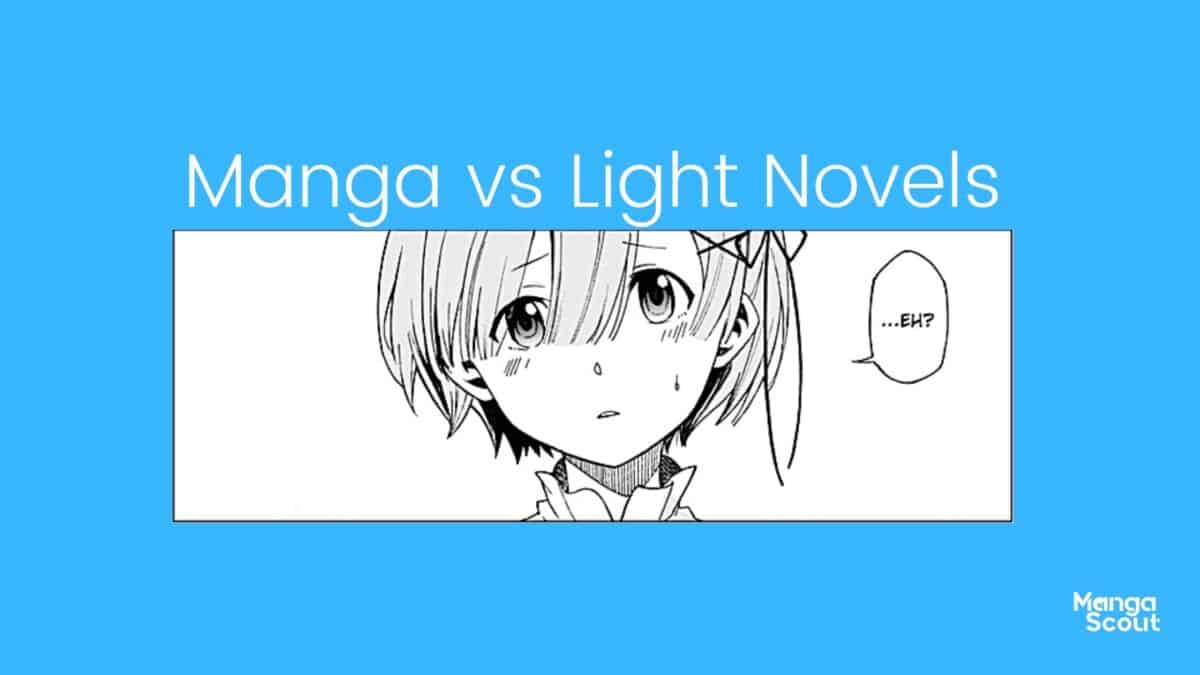 We are going to look at the top ten differences between manga and a light novel. Even mangas that have been based on light novels differ from their source material.

Let’s get into it.

1.) They are Different Story Mediums

On a fundamental level, manga and light novels are entirely different mediums. The term Manga refers to comic books originating in Japan. Its art style and demographics are distinct from Light novels, which are considered books.

Mangas have genres catering to people from as young as 5 to as old as 40. Light novels cater to teens and young adults only. Light novels are known as “raito noberu” in Japan and “Japanese novella” in America.

When light novels first came out in the 1990s, they were thought of as a medium that combined manga, games, and anime. Eventually, they branched out to genres and storylines going beyond this sub-culture similar to Western novels.

In manga, illustrations take on the most crucial role. Through the drawings, the readers get to know the feeling conveyed through each panel. For instance, we only grasp a character’s emotions by seeing his expressions. A close-up of his eyes, his downcast face, and his rigid stance communicate his feelings to us.

Also, during action scenes, the illustrations in manga are even more graphic than in the light novel.

Without these illustrations, a manga cannot be classified as a manga.

Monsters and fights that have only been described in the light novel.

Light novels also use manga-style art, and similar to manga, many of them are in black and white. However, unlike manga, they contain no text.

Here is the same scene from the Goblin Slayer light novel and manga.

On the one hand, this could give you a clearer picture of your characters. Words paint a perfect picture. Narratives describe how their eyes are auburn and not chocolate and how their hands could get clammy and cold.

On the other hand, how you interpret these descriptions are based on your own perception. For this reason, light novels tend to be written in simplistic language, using prose. This is to avoid too much variation in interpretation.

Additionally, light novels are driven by inner reflection by the characters than a manga.

The Haruhi Suzumiya light novels provide Kyon’s narration through certain events. However, this was not seen in the manga.

A similar case can be seen in the Classroom of the Elite. Many fans of the light novel felt disappointed in the manga. This is because the light novel used a lot of inner dialogue to convey emotions and further the plot. Yet, this dialogue wasn’t present in the manga leaving many scenes stilted and lacking.

Both well-illustrated mangas and well-written light novels invoke emotions but vary in the execution. Mangas focus on the climax of a scene. Like in the double spreads that contain the peak of certain fights.

And depending on the demographic, the story has to get to its inciting incident faster. They have fewer pages and thus time to entertain you.

Light novels focus on the Pacing. They have the liberty to slow scene elements and work up to the big moments. So, light novels stay in scenes longer, building tension.

To understand this, consider this manga panel and this light novel passage from Rakudai Kishi. On the one hand, the manga artist used 4 words to but on the other hand, the author stayed in the moment longer, explaining each meticulous detail.

The manga panel was able to make you feel a flash of excitement. The words of the light novel produced a lingering feeling of awe. The framing and description of that one panel felt intricate and artistic.

When a light novel is being made into a manga, the essential plot points are usually retained. However, they typically contain different approaches to dialogue and scenes. They also cater to different audiences allowing the manga to change scenes based on the genre.

Sword Art Online light novel and manga are very different in terms of content. Yes, they follow the same storyline, but some differences readers noticed are:

Reki Kahawara plans that eventually, Kirito and Asuna would break their duo. They will go on different quests and adventures. Then, the light novel and manga would diverge into separate storylines. In that way, they would compliment each other and match up by the time they reunite.

There is a difference in the quality and detail of visuals in light novels and manga like in the Goblin Slayer example above.

The light novel contains significantly fewer illustrations, so the artists spend more time per image. In the manga, mangakas have to meet weekly deadlines drawing 20 plus pages in a week. This results in the characters with less detailing.

Light novel images don’t always look lackluster compared to manga images. But for most, this does seem to be the case. We proved that in our 50 best manga panels post here.

A manga may catch up to its light novel counterpart before the latter is finished. Because of this, fillers are used to extend the story. There have also been cases wherein manga artists added new characters.

They do this to add spice to the narrative and extend the storyline. In this regard, we could then look at the light novel as succinct and precise in its story. Comparatively, the manga may contain details that are unnecessary to the overarching plot.

The manga version of Slayers faithfully adapts up to volume 8 of the light novel. It then added characters as comic relief and plot devices. The manga also has its specials.

Keeping the story going, mangas are known to go on for extended periods releasing chapters every week. It is why we still have titles such as One Piece Still releasing chapters daily. Mangas are serialized in weekly to monthly manga magazines. They are released per chapter, and they share space with other titles.

Light novels are no more than 250 pages published as stand-alone books. This is why entirely new titles have to be made for continuing series. Some authors may opt to release them per chapter on online platforms. But even then, they are materially distributed as a whole.

9.) The Endings Are Different

Some mangas choose to employ endings that differ from the light novel. An excellent example of this is Ore wo Suki Nano wa Omae Dake ka yo. The manga changed even the tone of relationships between the characters.

Accordingly, there are also variations in the main story and the build-up to the ending.

The light novel and manga of Spice and Wolf have similar endings. However, the manga skips 60% of the process, and the lead-up to the finale is also different.

The light novel and manga of Youjo Senki also give off different impressions of the story. This is because the way they progressed is different. The manga has more action than politics, while the light novel has more politics than action. Hence, the impact of the ending also differs.

Some mangakas choose to continue storylines using light novels instead of manga. Hence, the main story would be in manga format while the spin-offs are in light novel format.

Although Naruto the manga has ended, the world continues through spin-offs. These side stories are told through light novels.

Attack on Titan also does this. However, some of the spin-off light novels like Lost Girls and Before the Fall were eventually adapted to manga.

What manga have you read that differed significantly from its light novel?